World heavyweight champion Wilder, 33, has been criticised for discussing killing an opponent after he said he is "trying to get a body on my record".

Hunter, who trains Wilder's opponent on Saturday - Dominic Breazeale - said he was "disappointed" in the champion.

"He needs to really ask himself if that's what I'm all about," he said. "Is this the legacy I want to leave?"

"I think this is something that Deontay has to deal with internally," Hunter told BBC Sport in New York.

"Is this the example I want to show and come to grips with it? I think in the long run an apology is in line." 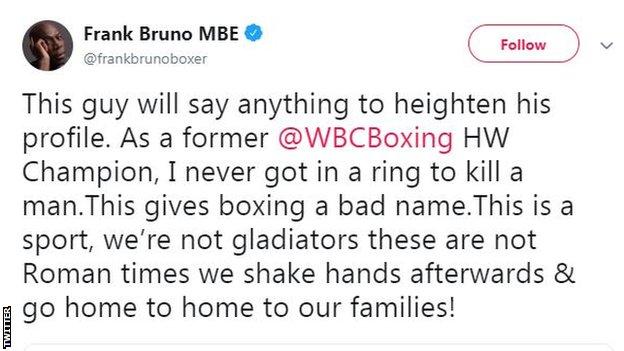 WBC world heavyweight title holder Wilder has made similar comments in the past and has repeated his statement in media huddles and on US talk shows this week.

"I've always been real. I don't worry about being politically correct."

Hunter - who also trains Britain's Amir Khan - added: "It's the wrong way of going about promoting. I am really disappointed in Deontay.

"He has the world so to speak in his hands and he is letting it slip out and making statements like that, that makes people cringe. It's irresponsible."

The likes of former world cruiserweight champion Tony Bellew and promoter Eddie Hearn have criticised Wilder's words in the past.

The American shares a rivalry with Breazeale, which intensified when the pair became embroiled in a hotel scuffle in 2017. Breazeale said Wilder's brother punched him in front of his wife and children.

Asked about Wilder's comments, Breazeale told BBC Sport: "It's definitely not appropriate, I mean come on, who says crazy stuff like that?

"You never want someone to be harmed from a fight. In this one, I understand we have personal reasons and a personal vendetta but if he gets hurt so be it. But do I ever wish death on someone, no of course not."

Breazeale, 33, has lost one of his 21 fights - a seventh-round knockout by Britain's unified world heavyweight champion Anthony Joshua in 2016.

The American will look to inflict a first defeat on Wilder - who has 40 wins and a draw in 41 fights - in a bout which will be covered in a live-text by BBC Sport in the early hours of Sunday morning.