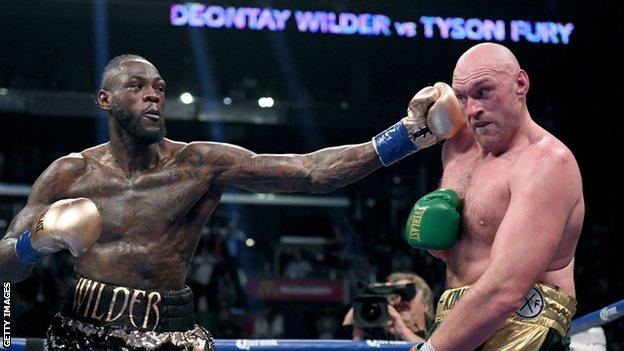 Deontay Wilder believes "a lot" of boxers are turning to doping and insists he knows the doctors issuing performance enhancing drugs.

Wilder told BBC Sport: "I think a lot of sports have a problem with doping, not just boxing. It's all over."

American Wilder has faced criticism for discussing killing an opponent as he prepares to face Dominic Breazeale.

The pair face off at the Barclays Center in Brooklyn on Saturday and Wilder has drawn scrutiny for saying he is "trying to get a body on my record".

But his comments on doping follow the high-profile drug test failure of American Jarrell Miller, who was set to face IBF, WBO and WBA world heavyweight champion Anthony Joshua on 1 June.

"I've been saying that Miller was doing some things and he ain't the only one," Wilder told BBC World Service Sport's Ade Adedoyin. "That's the sad part about it.

"These guys, they think they are smart. They try to play the system because when one drug gets caught there is another behind it that's getting created that we don't have the technology to detect.

"And it's a lot of fighters that's on it. I know the doctors that do it to them.

"It's just a shame that it's involved in boxing. Such a brutal sport.

"People always want to question me about the things that I say, like killing a man in the ring.

"But when you get guys that are putting things in their body. To enhance their body to do something that it's not meant to do. Putting certain drugs that give rats cancer and give you stamina to do certain things. Their actions are speaking louder than words."

Breazeale, 33, has lost one of his 21 fights - a seventh-round knockout by Britain's unified world heavyweight champion Joshua in 2016.

The American will look to inflict a first defeat on Wilder - who has 40 wins and a draw in 41 fights - in a bout which will be covered in a live text by BBC Sport in the early hours of Sunday morning.