On Saturday night, Scotland will either have a new boxing superstar in Josh Taylor or the USA will have another slick, unified world champion in Regis Prograis.

Also on Saturday night, Dereck Chisora - who admits he is "worried" - will either be on the cusp of a heavyweight world-title shot he does not desperately want or his opponent David Price will continue to breathe life into a career that looked finished 12 months ago.

These are tough-to-call fights at London's O2 Arena, all of which will be broadcast on BBC Radio 5 Live.

So what worries Chisora? Why have sunglasses rubbed Taylor up the wrong way? And why do the 5 Live Boxing pundits believe Price can upset the bookmakers? 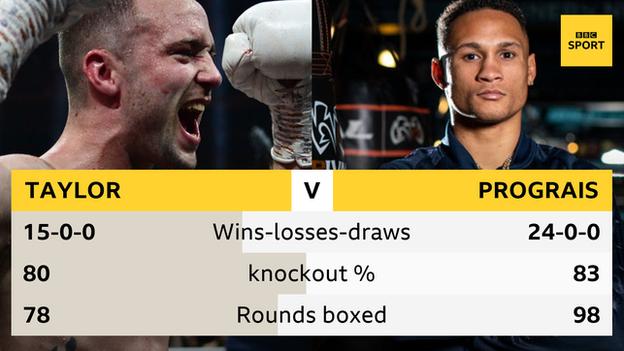 Scotland's Taylor - unbeaten in 15 fights - has been hyped every inch of the way to landing the IBF world super-lightweight title last time out.

Tall, rangy, classy and with plenty of grit, he appears made for unified champion status if he can take the WBA belt held by Prograis, who has 24 wins in as many outings.

Prograis, 30, starts a slight favourite at 8-13 with bookmakers but has never faced the hostility that can come from fighting outside his own country.

However, British fight fans have seen how well-schooled Americans can wreak havoc on these shores before, notably when Terence Crawford stunned Taylor's compatriot Ricky Burns in Glasgow to land a first world title in 2014.

Crawford would go on to become one of the most decorated fighters of modern times. The threat to Taylor is obvious and the motivation of what could be for Prograis is huge.

Taylor told BBC Sport: "Regis thinks he's a bit of a superstar - he's a bit of a show pony, coming here to a news conference with his shades on. It's raining outside. I don't know what it is but there is something about him that makes me want to take his chin off.

"He's an away fighter; he will be getting a big shock on Saturday. It might get to him a little bit. I can tell he is nervous when I look in his eyes."

If a shot at two belts and the future opportunities a win presents is not enough, the winner will also claim the World Boxing Super Series trophy for 2019.

BBC Sport boxing correspondent Mike Costello: I am seeing this as a genuine 50-50. I am leaning very slightly to Prograis for the simple fact I think there is a little bit more that's different about him and I think there is more than one way he can win.

I do think it's a really difficult fight to call, as difficult as any in 2019.

BBC Radio 5 Live boxing analyst Steve Bunce: Both of these can drop or stop the other. But I think this is a fight decided on intelligence, rather than power. I am going just the other way around. If Taylor can survive the best Prograis has to throw at him, I can see him getting home on a tight call.

A bad smell and show me the money 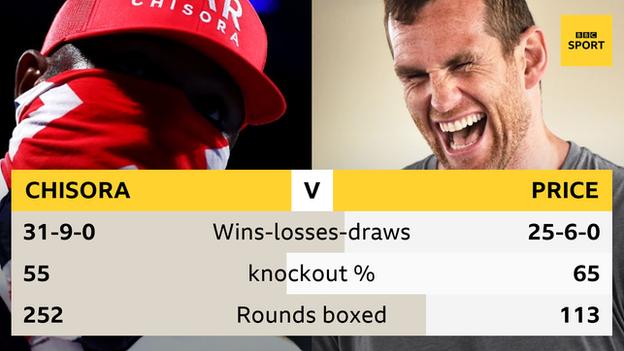 While Taylor and Prograis will sweat down to 10st, Chisora expects a heavyweight brawl and simply says it will be "bombs away" when the bell goes against Price.

Chisora, 35, was meant to face Joseph Parker, only for the New Zealand fighter to fall ill after being bitten by a spider.

It left 2008 Olympic bronze medallist Price an opening to build on a run of three wins in a row and presents the chance to move to the outskirts of conversations linking him with the biggest names in the division.

It is the chance for a rebirth for 36-year-old Price, who faced ridicule after defeats in recent years and admits he felt a "relief" when he decided he would retire following defeat to Christian Hammer in 2017. Retirement never came and he says a falling bank balance kept him fighting.

"It's been a stressful journey but I am proud," Price told BBC Sport.

"I have stuck at it, persevered - a lot of people would have thrown their hand in, especially with the criticism I have had. I have hung around alike a bad smell for some people and that's why it's nice to shove it in their faces again. I do believe I am coming into my peak.

"This opportunity for me is massive. The upside is beyond what I thought was even possible six or 18 months ago. So it was a no brainer in the end."

Price has previously sparred countless rounds with Chisora - who starts a 1-4 favourite - and in his own words, will face "a bruiser of a man".

Chisora meanwhile, will need to bring pressure to bear on his opponent given he stands almost seven inches shorter than Price.

Meanwhile, he says the prospect of a world-title shot is secondary to financial goals.

"I'm a bit worried about this fight to be honest," said Chisora, who last fought for a world title in 2012. "It's a worrying fight for me right now.

"Winning a world title and retiring with no money doesn't mean anything for me. I want the money, man. I want shows where I get paid and secure the future for my family.

"There are so many fighters who are world title holders, some are my friends, and they have no money. I don't want to be that guy. I want to make the money."

Mike Costello: There's a guessing game around Price. Has the win over Dave Allen given him the confidence surge that might make all the difference?

We know in the past that nervous energy has cost him - he has weakened so quickly during a contest. Against Allen it was so controlled. I know Allen is not Chisora, and Chisora has all that experience, but I think the boxing ability of Price is still there.

Maybe now, finally, he is beginning to become a proper professional boxer. I am genuinely excited at the prospect of this fight.

Steve Bunce: Price boxing with confidence can beat just about any version of Chisora.

Chisora is one of the most remarkable boxers in recent British history. His record defies belief. He walks out and keeps reinventing his history. I think it's a really hard fight, a fun fight, and I think Price will win again, I really do.