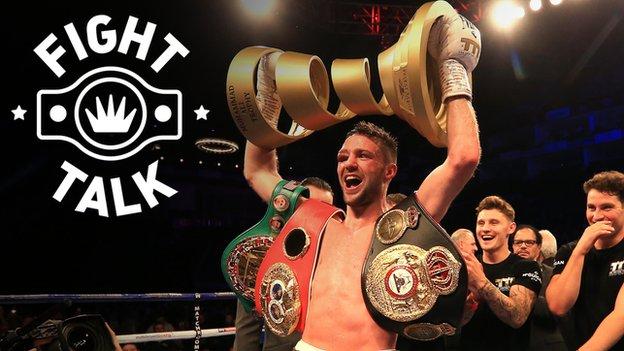 If you are viewing this page on the BBC News app please go here to see this story in full.

Here's our round-up of this week's boxing and MMA chat from across social media.

Is Taylor among the world's pound-for-pound best?

Scotland has a new sporting superstar.

Josh Taylor outpointed Regis Prograis at the O2 Arena on Saturday night in a thrilling fight. And to top it off, a true show of class from both fighters on the morning after the night before…

•Winner of the Muhammad Ali Trophy

He's only had 16 fights in four years as a professional, but boxing fans believe he is already top of the class of current British fighters... 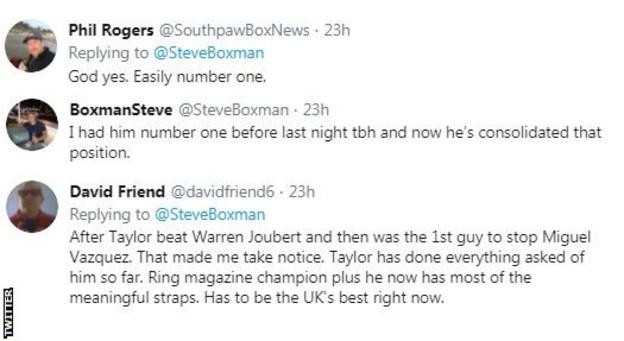 But does Taylor make it into the pound-for-pound list of the top 10 boxers on the planet?

But others believe Taylor first has to fight, and beat, undefeated WBO and WBC holder Jose Ramirez to become undisputed super-lightweight champion…

David Price suffered his seventh professional defeat after his corner threw in the towel in the heavyweight clash with fellow Briton Dereck Chisora on Saturday night.

Price had no complaints, saying he "appreciated" the actions of his team.

"My balance was gone and my head was gone a little bit," he told IFL TV.

He refused to make any rash decisions about his future, but promoter Kalle Sauerland also told IFL TV the Liverpudlian should retire and, while some think Price still has something to offer the sport, many boxing fans feel the same… 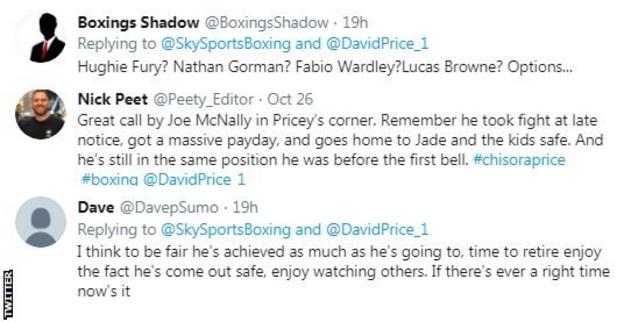 McGregor to train Fury in MMA?

Joining WWE, releasing a single with Robbie Williams, being filmed for a new 'at home with the Furys' reality TV show; it seems every week Tyson Fury is doing something even more bizarre than his previous venture.

Well, this week he told Sky Sports he could switch to Mixed Martial Arts and has even said he'll take up UFC star Conor McGregor's offer to train him.

Meanwhile, Fury was on a press tour this week to promote his WWE debut against Braun Strowman in Saudi Arabia on Thursday. He popped into the BBC Radio 1Xtra studios for a chat, where he revealed he regularly likes to "torture Deontay Wilder on Facetime"…

The middleweight contender announced he will return to the ring on 7 December in Brooklyn - taking on former standout amateur Matvey Korobov for the interim WBA title.

It will be the Brighton man's first outing since a unanimous decision over James DeGale in February.

But Hearn criticised Eubank's management team, telling the Boxing Social: "Callum Smith and Billy Joe Saunders are massive domestic fights he can take, and he's fighting a guy no-one really wants to fight and he's probably going to get beat because it's just the worst style for him."

Well, Eubank Jr was happy to have a little dig back at Hearn…

Douglas Lima had quite a night at Bellator 232 in Connecticut on Saturday.

Not only did the Brazilian recapture the welterweight title with a win over Rory MacDonald, he also walked away with $1m prize money.

And how did he celebrate? By being sprayed in Champagne by rapper 50 Cent, obviously…

'Any time, any place'

And we'll leave you with this bizarre video of billionaire Chinese businessman Jack Ma and future hall-of-famer Manny Pacquiao doing pad work, and then both calling out Floyd Mayweather...