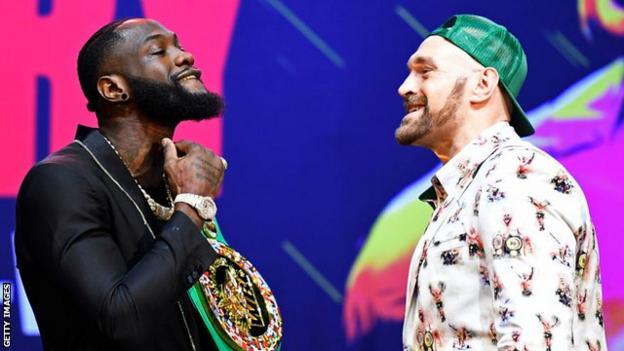 Not only are Tyson Fury and Deontay Wilder two of the best heavyweight boxers of their generation, they are arguably the most entertaining.

While Fury's counter-punching style and Wilder's knockout power contrast inside the ring, their big personalities share key similarities outside of it.

Whether it's wrestling, duetting with pop stars or opening restaurants, Fury and Wilder are never far from the headlines.

Before their much-anticipated rematch in Las Vegas on Saturday, we look at why the two heavyweights are the ultimate boxing showmen.

There's one moment that transcended every other in Fury and Wilder's thrilling first fight, 14 months ago in Los Angeles.

It came in round 12, when the American unleashed a signature combination which brutally dropped Fury, leaving him flat out on the canvas.

Everyone watching was certain the fight was over.

Wilder was celebrating, Fury was motionless and the crowd were raucous.

Then came the movie-like scene.

With the 10 count nearing, the Gypsy King suddenly sat up and clambered to his feet, leaving a look of astonishment on the face of WBC champion Wilder.

Like a zombie rising from a grave, it led to comparisons with WWE superstar the Undertaker...

This was only the beginning of Tyson Fury's affiliation with the WWE...

The 'showdown in Saudi'

What does Tyson Fury have in common with both Mike Tyson and Floyd Mayweather?

Apart from them all being boxers, all three have made appearances in the WWE.

However, in a business which requires as much charisma as it does athletic ability, no boxer has looked as comfortable wrestling as the Gypsy King.

After appearing in a number of WWE shows throughout October, it emerged Fury had signed a contract to face the 6ft 8in Braun Strowman at the Crown Jewel event in Saudi Arabia.

And he didn't disappoint...

The greatest singers are also the best entertainers.

So the Gypsy King might be a bit out of place there, but his enthusiasm for a singalong can't be doubted.

Remember when he sang Sweet Caroline before his fight against Francesco Pianeta in 2018?

Or how about his rendition of American Pie following the draw with Deontay Wilder in Las Vegas?

And don't forget his duet with pop star Robbie Williams at Christmas, where Fury provided guest vocals for the song 'Bad Sharon'.

Both boxers have wild wardrobes

The Gypsy King's Arabian garbs in the WWE offered only a glimpse into his eccentric clothes collection - a trait he shares with opponent Wilder.

There's that time he wore an American-themed outfit before his fight against Tom Schwarz last year in Las Vegas. 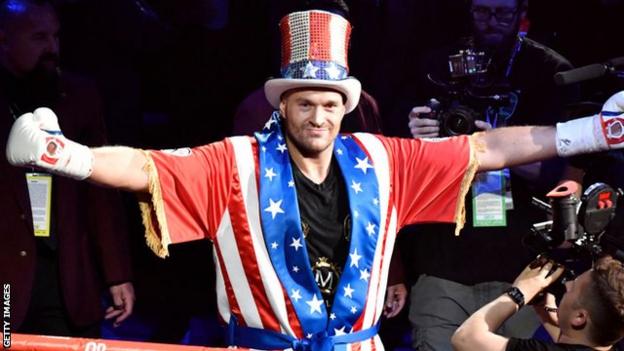 And also the time he dressed up as Batman for a pre-fight press conference with former heavyweight champion Wladimir Klitschko.

American Wilder is no stranger himself to a new look...

He wore this Game of Thrones-esque crown for his rematch with Luis Ortiz in 2019... 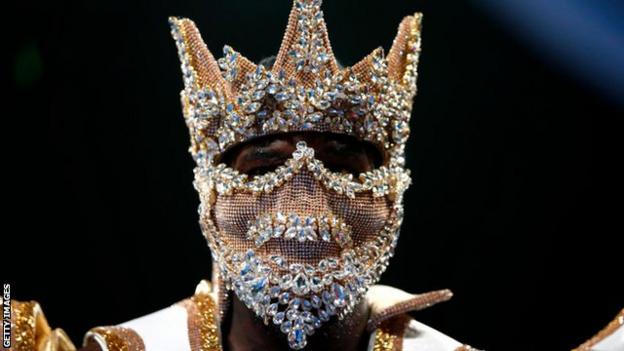 And donned this scary-looking mask for a bout the year before against the same opponent. 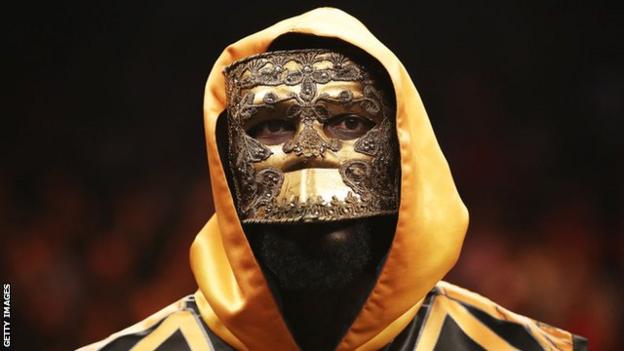 Speaking of scary, Wilder is known for shouting his favourite catchphrase 'Bomb Squad' at people when they least expect it...

The Bronze Bomber has one of the most powerful punches in boxing and has 41 knockout victories from 43 fights.

He showcased this shock value in 2018 when he punched a Sombrero-wearing mascot live on an American TV show.

Although American broadcaster ESPN said no injury had been caused, Wilder still offered the following apology on his Instagram:

"I sincerely apologise to the brave man that was injured [if this is true]. I have the utmost respect for him, his participation, willingness and courage," said Wilder.

Then there's the time Wilder unexpectedly appeared in Batley, West Yorkshire for the opening of a restaurant.

In what was described as "surreal scenes" by local MP Tracy Brabin, hundreds of men, women and children queued outside the venue hoping to catch a glimpse of the heavyweight champion.

Who knows what will happen when boxing's ultimate showmen meet inside the ring for the second time in Las Vegas on Saturday...