Evander Holyfield lost part of his ear, Mike Tyson lost an aura of fear, bookmakers got slammed and promoters got rich.

These days talk circulates of one more Tyson-Holyfield contest to raise money for good causes.

What went on as they punched, head-butted and bit a way to splitting $120m over two bouts in the late 1990s was anything but charitable.

'My mother said be ready'

We wait to see if two heavyweight legends rekindle their rivalry and waiting has always been part of the Tyson-Holyfield business.

Six years passed from when they were first due to fight to the opening bell of their 1996 Las Vegas showdown. Unforeseen defeats and injuries had proven minor hurdles. Tyson's prison sentence for rape and Holyfield's enforced spell in retirement with a misdiagnosed heart condition were more serious blockades.

Little wonder the fight poster was simply emblazoned with the word 'Finally'. Finally, Tyson would wipe the floor with a fighter sporting three losses from his previous seven bouts, or so the theory went.

"I had a good mother who was telling me never lose against a reputation," Holyfield recalls as he watches the bout back on the Greatest Fights podcast.

"She said 'son, you can't wish a good person away, they ain't going nowhere. You have to suck it up and be ready'. I was more ready than I was in any other fight I ever had."

A favourite starved of help

Prison had not detracted from the Tyson draw. His four wins since release - inside just eight rounds in total - pointed to his quality in the ring remaining in place too.

Forty members of the press were asked to pick a winner and just one - from the Boston Globe - picked Holyfield.

Bookmakers made Holyfield as high as 25-1 to draw in business. It worked, prompting enough interest for him to be backed in to 5-1. Holyfield's co-trainer Lou Duva wagered on his man at 16-1 and 14-1 to pocket $230,000 in all. One bookmaker said the trade simply got "pasted" by the result.

Tyson would later say he "blacked out" and could remember nothing after round two.

"They offered him nothing in that corner," recalls 5 Live Boxing's Steve Bunce. "No help, no salvation and no solutions." 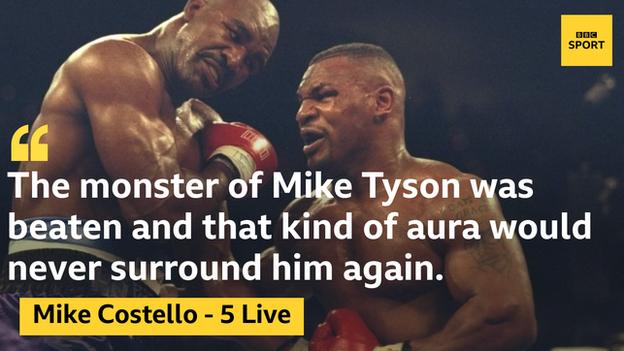 Three separate bouts for world heavyweight titles took place on the card on that at the MGM Grand, an almost unthinkable event in the present day. Tyson was defending the WBA belt against Holyfield.

Promoter Don King had negotiated personal shares in the MGM Grand as part of the six-fight deal he agreed for Tyson with the venue.

King would sell them for $27.5m when the agreement was eventually scrapped. There were countless deals, associations, vested interests and hangers-on attached to Tyson and yet 10 rounds in, he was lonely in the ring.

He swayed on the spot - his eyes vacant - after a relentless attack late in the 10th. Less than 40 seconds into the 11th, he was stopped under a barrage.

"Being beaten the way he was, it was a puncturing of his aura," says 5 Live Boxing's Mike Costello. "The monster of Mike Tyson was defeated and that kind of aura would never surround him again."

A night of chaos for charity?

There were gripes from Team Tyson - mainly from the irrepressible King - about Holyfield's use of his head in the win as the pair geared up for the inevitable rematch seven months later.

Their rivalry, which began during brutal sparring sessions in the early 1980s, would now break all records for gate and pay-per-view revenue in their second meeting.

Three rounds in, Tyson bit both of his opponent's ears and was disqualified. Some predicted before a punch was thrown that he would look for a way out. Holyfield simply concedes he was seconds away from biting back.

"I thought of my grandmother always telling me about revenge and that they always catch the second person," says Holyfield, who was again a betting underdog.

"I truly believe that if there wasn't a Mike Tyson people wouldn't think about how great I was. You are only as good as the people you fight.

"Mike was a guy, bad boy and all... people liked everything about him. People like winners.

"Me and him have so many things in common and I kind of felt that I would have been bad too if it wasn't for my momma."

And so a comeback of sorts in their fifties may be one more common move for the pair.

Their 1996 affair was longed for, the repeat fixture was ludicrous and both were lucrative.

Across both nights we saw chaos, not charity. Some would love one more, others might cringe at the thought. You can be sure most would take a peek.