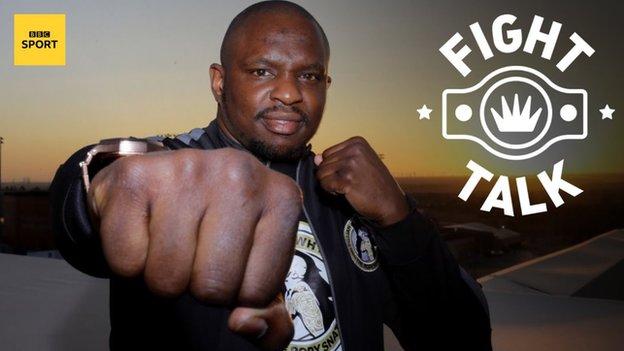 In this week's Fight Talk we look at the obstacles that still need to be overcome before Tyson Fury and Anthony Joshua can fight next year, Dillian Whyte takes legal action against the WBC after Fury-Joshua two-fight 'agreement in principle,' Chris Eubank Jr takes a dig at rival Billy Joe Saunders and Mike Tyson teaches UFC star Henry Cejudo how to throw the perfect uppercut.

It was an announcement that surprised many in boxing last week as world champions Tyson Fury and Anthony Joshua agreed financial terms for a two-fight deal in 2021.

Two Britons. For all of the belts. In the heavyweight division. Can it get any better than this?

We've already started debating about who wins and how. In fact, Britain's WBO super-middleweight champion Billy Joe Saunders is so confident his pal Fury will become the undisputed champion that he told IFL TV he is willing to bet the entire purse for his next fight on it.

But before we get too excited - and not wanting to put a dampener on your optimism - there are a few obstacles to overcome before we can be completely confident Fury-AJ will actually happen.

Boxing fans, rightly, were quick to point out winning those fights isn't a given for the champions…

And what about Dillian Whyte? The Briton is the mandatory challenger for Fury's WBC belt. And he's been in the number one challenger position for nearly 1,000 days.

The 'Body Snatcher' is the 'interim' champion and was told he will get his shot by February 2021, before the announcement of the Fury-Joshua two-fight agreement.

Well it seems his patience has worn out after WBC president Mauricio Sulaiman confirmed Whyte has started legal proceedings against the sanctioning body over the date of his mandatory shot.

"There is a procedure with regards to the date of the mandatory in the heavyweight division," Sulaiman told Sky Sports.

"Upon direct advice of WBC legal counsel I am not in position to discuss any further."

Earlier in the week, Whyte's brother said the heavyweight had "been failed" by promoter Eddie Hearn, who also represents Joshua.

"It's unfair, it's a bitter pill to swallow," Dean Whyte told IFL TV.

But Matchroom Boxing's Hearn still expects Whyte to face Fury by February 2021 and told Sky Sports the Londoner could even step in for Wilder, should the American withdraw from his world-title rematch.

That said, it doesn't seem Whyte is on Fury's radar for the time being.

"I've fought the most vicious punchers in their own countries. I don't fear a stocky plodder who comes forward with no power," the Fury told Dev Sahni on The Lockdown Lowdown…

Another spanner in the works for Fury-Joshua could come in the form of Ukraine's Oleksandr Usyk. The former cruiserweight king is the mandatory challenger for Joshua's WBO belt and will be looking for his shot at a heavyweight title.

Fury's co-promoter Bob Arum has a simple answer to all these hurdles.

"It's probably better if Dillian Whyte fights Usyk to get a real contender," he told Talksport.

But there is definitely no love lost between former foes Chris Eubank Jr and Billy Joe Saunders.

After Saunders won their 2016 clash on points, the back-and-forth trash continued. And almost six years later, it is still going strong.

Eubank Jr was asked for his thoughts on Saunders potentially missing out on a mega-money making fight with Mexican Saul 'Canelo' Alvarez.

"That's what he deserves, the guy's a lowlife," he told Talksport.

"He's an extremely bad representative for the sport we all love. Why should he fight Canelo when he's going to go in there and try and survive for the money?"

The animosity between these two is something else. A rematch has to happen at some point in their careers, for the build-up alone, if nothing else.

Who better to learn from than the former heavyweight champion of the world and a man once hailed as 'the baddest man on the planet'?

Mike Tyson - who wants to fight again this year at the age of 53 - has been putting UFC star Henry Cejudo through his paces.

And it seems he and Tyson have built up quite the friendship. They appeared together at an All Elite Wrestling event last month and are now working together in the gym, with 'Iron Mike' sharing the secrets behind those infamous and explosive uppercuts and hooks…