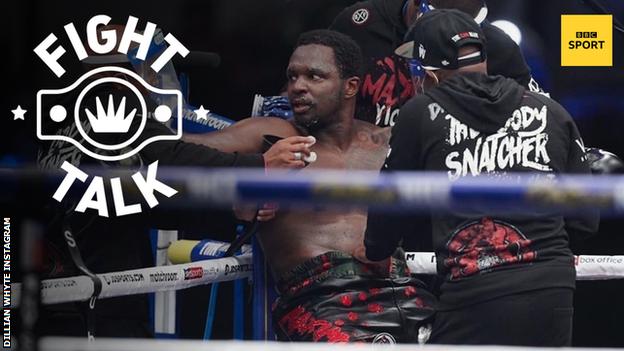 In this week's Fight Talk we look at how the boxing world reacted to Dillian Whyte's loss to Russian Alexander Povetkin, as the Briton says he wants to get his career back on track with a rematch by the end of the year.

We also hear the smooth sounds of Eddie Hearn from Matchroom Boxing's karaoke event, while rival promoter Frank Warren takes a dig at Hearn with a song of his own, and we review Irishwoman Katie Taylor's win over Delfine Persoon.

Boxing is a cruel sport. After waiting around 1,000 days as the number one challenger for the WBC heavyweight belt, Whyte suffered the biggest setback in his career on a Saturday night in Essex.

With a world-title shot promised to him next, 'The Body Snatcher' risked it all against Povetkin at Hearn's 'Fight Camp'. It was all going better than planned as he dropped his opponent twice in the fourth round, before an unforgettable fifth which saw Povetkin knockout Whyte with a beautifully-timed uppercut.

Fellow boxers, trainers, even footballers and actors, were quick to sympathise with Whyte but also admire the skills of Povetkin…

WBO, WBA and IBF champion Anthony Joshua, who beat bitter-rival Whyte in 2015, had this to say…

WBC champion Tyson Fury, who Whyte could have faced next, told BT Sport that boxing is "all about levels" and Whyte needs to regroup.

An Olympic gold medallist who has only ever been beaten by Wladimir Klitschko and Joshua, Povetkin is top-level fighter. Perhaps Whyte and his team, promoters, the media and some fans were all guilty of overlooking the 40-year-old.

A few days later, a tired-looking Whyte was gracious in defeat and told his social media followers that he wants the rematch to happen by the end of the year…

"He definitely needs to make changes and there's just a few other little things he needs to learn," Bellew told Talksport.

"But I definitely believe Dillian Whyte will still get to the final destination and become a heavyweight champion of the world."

If Whyte does win a world title, he will prove a lot of boxing fans wrong… 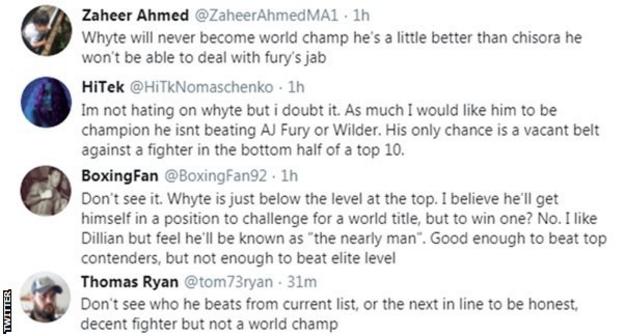 Earlier in the week, promoter Eddie Hearn showed he can hold a tune as he channelled his inner Bill Withers...

American Bob Arum, who with Queensberry Promotions' Warren co-promotes Fury, also didn't hold back with his thoughts on Whyte, and suggested that an undisputed, all-British fight between Fury and Joshua is now closer than ever.

"Dillian Whyte got what he deserved," Arum told IFL TV.

"If Kubrat Pulev doesn't beat Joshua and Fury is able to again beat Deontay Wilder, then we can look forward without any obstacles to a Fury v Joshua fight, which is the biggest heavyweight match of our time."

Also on Saturday night, Ireland's Taylor came through her rematch with Belgian Persoon with a points win.

Many thought that Taylor, the undisputed world lightweight champion, was fortunate to be given the decision in their first fight at Madison Square Garden in 2019.

It was another close affair but Pearson had no quibbles with the loss, saying: "I give respect to Katie - she deserves to win."

But fans watching the fight were still split… 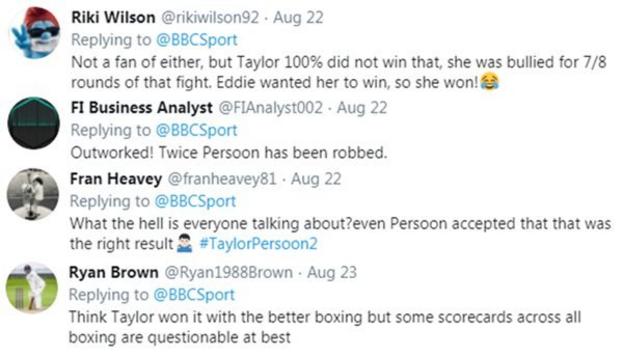 Although the general feeling within boxing was that Taylor was a clear winner.