In this week's Fight Talk we look at how the boxing world reacted to an eventful - and somewhat strange - night in Florida which saw the return of Evander Holyfield, Donald Trump take on commentary duties and David Haye beat his mate before calling out a heavyweight world champion.

Plus, find out which promoter showed us he's a dab hand at cricket as he turns out for his local club side.

On Saturday in Florida we witnessed one of the most surreal nights in boxing history.

Former President of the United States of America, Donald Trump, was commentating on a fight night headlined by 58-year-old ex-heavyweight world champion Evander Holyfield, with Britain's David Haye on the undercard.

We're not making this up.

With so much to unpick, we'll start with Holyfield's clash with Brazil's former UFC fighter Vitor Belfort.

Holyfield, who once held all the belts in the cruiserweight division, has not fought professionally for 10 years, but stepped in at late notice after Oscar De La Hoya was hospitalised with Covid-19.

The American failed to throw a meaningful punch as he suffered a first-round technical knockout to Belfort.

But for some of those involved in the sport, seeing an aged Holyfield return at the Triller Fight Night event - and the manner of his defeat - was a step too far… 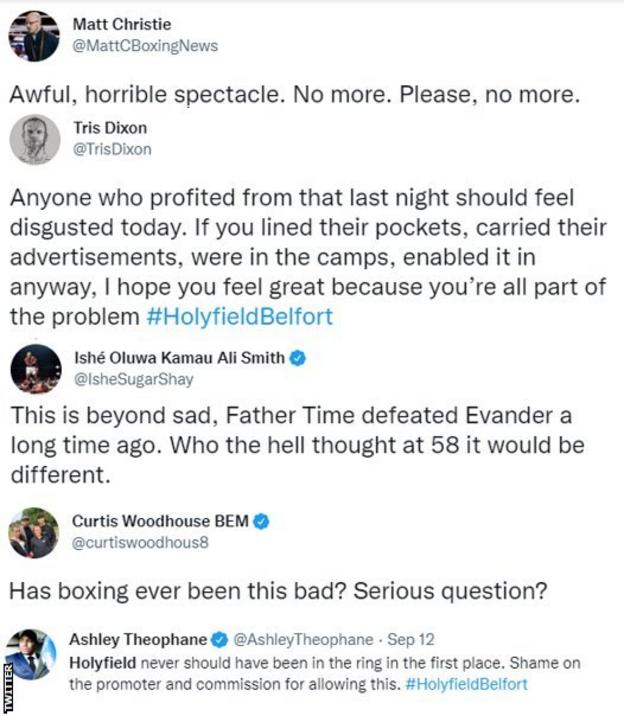 It's fair say his involvement with the event raised more than a few eyebrows.

When asked at the pre-fight news conference who he'd like to share the ring with, Trump told fans he'd knock out serving USA president Joe Biden "within the first few seconds"…

On fight night, the politician was calling the action alongside his son Donald Trump Jr.

During Haye's fight with Joe Fournier (more on that shortly), Trump criticised the bout by saying "right now, the audience prefers politics".

Trump also said Haye "looks like he's got a lot of talent", perhaps unaware Haye is a former undisputed cruiserweight champion who also won a world title at heavyweight.

Like many of us, boxing manager Sam Jones couldn't quite believe what he was seeing…

As if things couldn't get any more bizarre, boxing reporter Mike Coppinger tweeted that another former president is also being linked with a boxing commentary stint…

What next? Theresa May commentating on a Frank Bruno comeback? In the world we're living in, don't write it off.

'It's laughable' - Haye calls out Fury

As Trump alluded to, Londoner Haye's comeback fight - his first bout since retiring three years ago - was a somewhat disappointing affair.

Haye, 40, was taking on 38-year-old Joe Fournier, a businessman who had notched up nine wins as a professional.

The two are close friends, with recent pictures on social media showing them holidaying in Greece.

In the build-up to the fight the two regularly exchanged words on social media, with Haye boasting that he'd put friendship aside and look for the stoppage.

But in a completely one-sided clash, Haye picked apart his opponent in a dominant points decision win, but was seemingly reluctant to go for the knockout.

After the fight there was a real plot twist; Haye - who had previously suggested his fight was a one-off and he was happily retired - called out WBC heavyweight champion Tyson Fury.

"There's one man I'll come back to professional boxing to fight - Tyson Fury. I know his kryptonite," he said.

Haye suffered several injuries towards the end of his career and retired from the sport after back-to-back losses to Liverpool's Tony Bellew.

This is how social media reacted to Haye's latest comments…

As for Fury, a few weeks ago he decided to take a break from social media to focus on his upcoming trilogy bout against American Deontay Wilder in Las Vegas on 9 October…

Well, the self-imposed social media blackout was lifted as this week he was embroiled in a back and forth with fellow British heavyweight Dillian Whyte.

The Twitter row erupted after Fury shared who he'd like to face in his next five fights, going against the old adage in boxing to never look past your next opponent…

The exchange between Fury and Whyte consisted of some colourful language, but the general gist was Fury saying "I'd smash you to bits" and Whyte responding with "hit me up baby I'm covered".

The boxing world is crying out for a undisputed clash between Anthony Joshua and Fury, but there's no denying a Whyte-Fury fight would be a blockbuster event, just for the build-up alone.

And finally, it wouldn't be Fight Talk without a section on Matchroom Boxing's Eddie Hearn.

Last week we showed him unleashing a right hand on the punch machine, and this week promoter Hearn swapped boxing mitts for cricket gloves as he turned out for his local club.

Here is playing glorious cover drive through the off side...

Hearn and England skipper Joe Root to dominate Australia in the Ashes this winter? As we've seen this weekend, anything can happen.