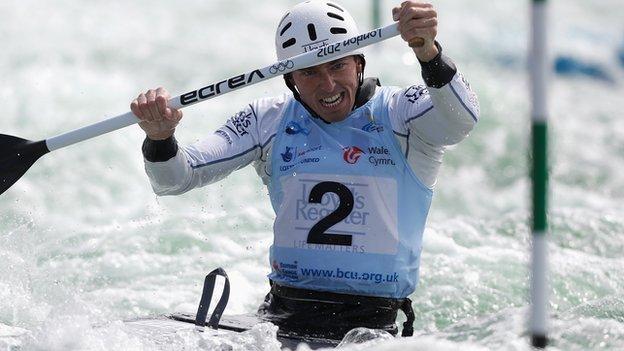 It will be the first time the Olympic venue has hosted international competition since London 2012.

Florence, who won double gold at last year's World Championships, will compete in the C1 and C2 events.

David Florence does 10 90-minute sessions per week, all of which are on the water. "I don't do any training in the gym," he said. Of those 10 sessions, eight will be in the C1 boat and two in the C2.

"We train on the water at Lee Valley every day so we know the water better than anyone," Florence told BBC Sport.

"But it will be a very strong field this weekend and while every course is different, the best guys always come out on top."

Britain won two canoe slalom medals at Lee Valley during London 2012. Etienne Stott and Tim Baille won gold in the C2, while Florence won silver with Richard Hounslow, to add to the silver won in Beijing.

Florence was disappointed to have missed out on gold for the second successive Games, but bounced back the following season by becoming the first British canoe slalom paddler to win both the C1 and C2 world titles in the same year in 2013.

The 31-year-old began his season last weekend at the European Championships in Austria, setting the fastest time in the C2 heats with team-mate Richard Hounslow.

They were on course for bronze in the final but picked up four penalty points for hitting two gates and dropped to seventh.

"It was disappointing but we saw what times we were capable of which gives me confidence going to Lee Valley," added Florence.

"There will be a stronger field in the C1 this weekend than there was at the Olympics because there are three boats per nation in World Cup races as opposed to only one at the Olympics.

"It's going to be a big race. I'm really looking forward to it."

Fiona Pennie, 31, a former world silver medallist who will compete in the K1, said: "Technically, I would say I'm a lot better than I was last year so hopefully I can be impressive competing on home water.

"The British paddlers should perform pretty well, because we spent so much time on the water and it's a challenging course."

The three-day event, which starts on Friday, will be live on the Red Button on Saturday and Sunday and acts as a dry run for the venue which hosts the World Championships in September 2015.

Great Britain's team for the World Cup at Lee Valley: