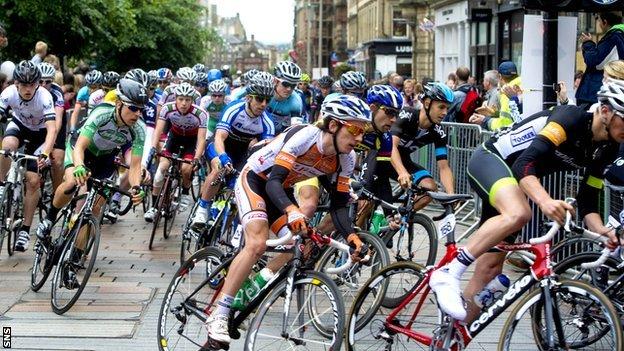 The morning's leaden skies were familiar to any Glaswegian but the arrival of tens of thousands of spectators for the British National Road Race Championships last month made the city almost unrecognisable.

So to witness the UK's top riders being afforded the freedom of the city, last seen when Brad Pitt arrived to film World War Z, was simply a revelation.

On tarmac and dirt track, the public have had a glimpse of what awaits when Glasgow, "the second city of the empire", hosts the Commonwealth Games next summer.

Scottish Cycling's president Alasdair MacLennan called the road race event "absolutely stunning", while for the organisation's chief executive, Craig Burn, the National Championships were "fantastic for cycling in Britain and in Scotland".

With their virtuoso performances on the road, served notice of the standard others must match to compete for Commonwealth gold next year.

The actual route for the Games road race will be discussed at a meeting of interested parties at the end of July but Burn reckons it will follow 95% of the route used for the National Championships.

"I think today gave you a feel for what it's going to be like come the Commonwealth Games," he said at Glasgow Green after Cavendish's winning sprint finish.

"There was well in excess of 30,000 spectators. It was jammed five deep in places.

"The course was very challenging, with the sharp corners and steep climbs. It's something we'll take feedback on.

"There will be more street furnishings. Some of those corners will be taken back and lights moved."

For the riders, the feedback for race organisers was generally very positive.

Armitstead told BBC Scotland: "I think the organisation has been amazing. I felt completely safe and happy to be on such a competitive course.

"You think there are only a few climbs but at the end of eight laps you have done near on 40 climbs so it does take it out of you."

For Cavendish, the course was "not too difficult".

He said: "There are short, sharp climbs but they're only 100m long: it's more the 90-degree corners.

"There's a lot of acceleration. Over 180km, 30 corners per lap, 13 laps, that all adds up. It makes your power output pretty high."

Team Garmin Sharp rider David Millar, a medal prospect for Scotland at the Games said it's a course "where you have to be vigilant the whole time" and added: "I enjoyed it; it's a real racer's course."

"It was incredible," he said. "Literally, in my whole career, I have never been cheered that much on the road.

"It was spine-tingling. I have never been called 'Davie Millar' so much, which I kind of like."

provided a similar boost for home riders. The winner of the senior women's race was Glasgow's Lee Craigie.

"It was amazing to hear people shouting out my name around the course," she said.

"It really gives you a sense of what the Commonwealth Games is going to be like in Glasgow next year."

While the mountain bikers will be at the Cathkin Braes trails to Glasgow's south-east, the road racers will leave the historic Glasgow Green, just to the east of the city centre, before heading along the main shopping thoroughfares and into the west end.

In the National Championships, the riders swooshed through Kelvingrove Park, where the lawn bowls medals will be contested, and past Glasgow University and the banks of red sandstone tenements, which offered an intriguing backdrop.

The route then took the cyclists back into centre, up the brutal incline of Montrose Street, then along cobbled roads around High Street before enjoying a descent to Glasgow Green again.

Requiring similar planning to the road race, the Commonwealth Games time trial will be held in East Dunbartonshire and North Lanarkshire and the marathon will be contested to the south of the River Clyde.

"A whole load of logistics will have been tested," said Burn after the road race, "right down to testing radios and width of barriers, number of support vehicles, and we'll put that into the planning for making sure Glasgow 2014 is a huge success."

Greg Warnecke, Glasgow 2014's head of sport, was delighted to see a rider of Cavendish's standing win the National title in Glasgow.

Last week the Australian told BBC Scotland it was "a great endorsement" for the course.

He explained that the lay-out of the route has to be a balance between the technical requirements and the needs of stakeholders such as Glasgow Life and Glasgow City Marketing Bureau.

"It's a thinking man's race, you can't just let your legs go," he said.

"But it should be something that showcases the city's amazing architecture."

Like Burn, Warnecke reckons some of the corners may be widened to take account of the stronger peloton that may be grouped together in greater numbers than in last month's road race.

He said there were plans, too, to install giant screens around the city to allow people to keep abreast of developments in the race.

On the whole, though, he said the technical delegate of the UCI [Union Cycliste Internationale] was "ecstatic" about the course.

Scottish Cycling's MacLennan can scarcely believe the turnaround in the sport's fortunes.

"Five years ago we were operating out of a Portakabin in Meadowbank on a 40-year-old outdoor velodrome," he said.

"We've now moved to a state-of-the-art velodrome, our offices are there, and we've got a world-class mountain bike circuit.

"It's like chalk and cheese. We've come a million miles in five years."