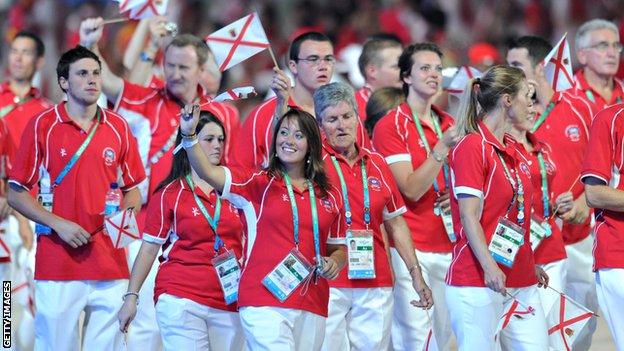 Commonwealth Games Association of Jersey president Alan Cross says the island should be able to take its biggest ever team to next year's event in Glasgow.

"We would be expecting to take a team of about 40 to Glasgow," Cross told BBC Radio Jersey.

The Games is the pinnacle when it comes to representing Jersey

"Realistically the way the numbers are shaping up we could even be higher than 40 - it could well be nearer 50."

Cross said the gradual increase in numbers, from single-figure sized teams when the Games were first in Scotland in 1970, was a reflection on the success of his organisation.

"Our numbers have increased a lot over the years which is one of the objectives of our association - to gradually drive up standards, butt we do set our own qualifying standards as all Commonwealth nations and they have to be realistic," he continued.

"People don't just get on the plane and take part. The Commonwealth Games is the pinnacle when it comes to representing Jersey and that's been proved over the years."

Jersey will head for Glasgow on the back of a successful Island Games in Bermuda, where they finished third in the medal table.

Cross also said he was optimistic that badminton players Elizabeth Cann, Mariana Agathangelou and Mark Constable would be able to transfer their allegiance from England to Jersey for the Games.