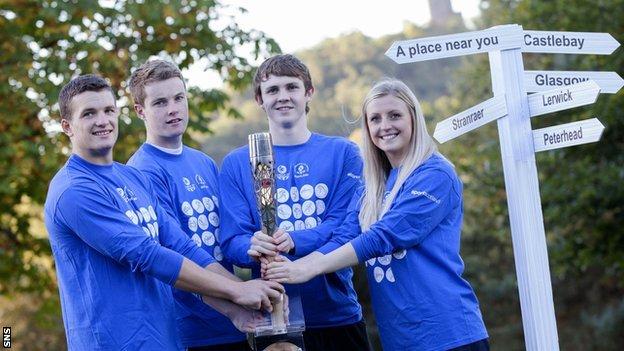 Scottish athletes who helped launch the search for 4,000 Queen's Relay baton-bearers at Stirling say they are beginning to feel the excitement build towards the Commonwealth Games.

"The next time the baton comes to Scotland, we'll be starting the Games."

Murdoch, originally from Alexandria in West Dunbartonshire, is the Scottish record holder for the 50m and 100m breaststroke and reached the semi-finals at this year's World Swimming Championships.

He told BBC Scotland: "It's going to be an incredible experience.

"Watching the Olympics in 2012 in London and seeing the support that the athletes were given, it's going to make it that extra special to me to have all that home support."

Austin hopes he will be Murdoch's Scotland team-mate next summer. The 19-year-old University of Stirling maths student took up the triathlon aged 11 having been an accomplished swimmer and runner.

Last month he won silver in the World Under-23 Triathlon Championships in London's Hyde Park.

"I can't wait for the chance to compete in the Games in my home city," he said at the launch of the search for baton-bearers when it returns to Scotland next summer for a 40-day tour leading up to the Games opening ceremony at Celtic Park on 23 July.

"It's quite easy to train and get in your own little bubble so coming to things like this reminds you of the bigger picture.

"For the next six or seven months it will be a lot of long, hard hours training, not much racing.

"The season starts in April and I'll first try to qualify and try to get as much senior race experience as I can before the big day."

Kirkwall's Campbell, 20, is in with a chance of inclusion in the Scotland netball squad and plans to work as hard as possible to help her selection chances.

"All the hype is starting to build up," she said.

"At the moment it's just giving your all in every training session.

"It would be really good to make Orkney proud and get in that final 12 for the Commonwealth Games.

"I would be representing Scotland but it would be really good to get Orkney on the map to show that good sporting people can come from Orkney, because there's a lot of talent up there."