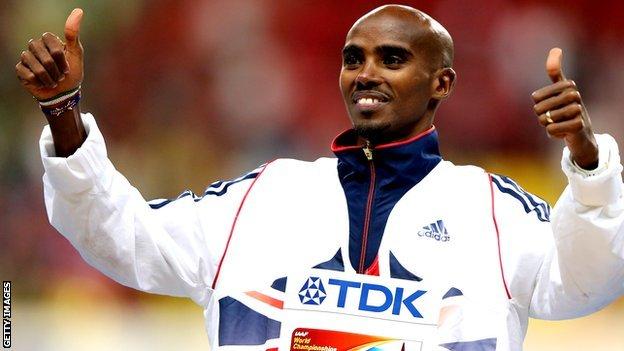 Mo Farah provided Olympic joy for London last year with two gold medals but it seems he may have upset Glasgow with just four small words: "Not on my list."

Following his declaration that the London Marathon will be his major target next year, it appears that for some competitors the Queen's Baton does not shine quite as brightly as the Olympic torch.

Farah's comments about potential participation in the Commonwealth Games led to a bullish response from the Glasgow 2014 organisers, who said they were "looking forward to welcoming 4,500 elite athletes from around the Commonwealth".

They added that "a number of leading names" had already expressed their intention to compete.

"Glasgow is a bonus if I do it but it is not on my list.

"I've got to come off the [London] marathon [in April] healthy and then I'd make a decision."

Just who those leading names will be when the lights go up on Scotland's biggest ever sporting party next year is not yet certain.

But we do know that Scotland's most successful sporting star will not be among them.

Sir Chris Hoy, winner of six Olympic gold medals, announced earlier this year that he was ending his glittering career as a track cyclist.

One star who will be there, though, is Jessica-Ennis Hill, the poster girl from London 2012.

She won a memorable gold in the heptathlon last year but has yet to take the top prize at the Commonwealth Games. She hopes to put that right in Glasgow.

The same is true for the man who attracts the biggest crowds of all - Usain Bolt.

The fastest man on earth, and the only man to have successfully defended the 100m, 200m and 4x100m Olympic titles, Bolt says the Commonwealth Games is on his to-do list.

Even then, though, the Jamaican concedes the final decision will be left to his coach.

If he does compete in Scotland, however, it is unlikely to be in the blue riband 100m.

Bolt, who is the advertising star of Glasgow 2014's biggest sponsor Virgin, says he will run the 200m if he attends.

He would be the jewel in the Commonwealth crown if he shows up, but others are being wooed to help deliver.

Tom Daley has been working as an ambassador for the Games and looks likely to be turning out for England in the diving.

Nicola Adams will be leading the charge for England's boxers in the ring, as the Games welcome women to the sport for the first time.

And celebrated cyclist Mark Cavendish, from the Isle of Man, could be back on the Glasgow roads a year after taking the British road race title.

Despite Hoy's retirement, the home fans should have a number of stars to cheer on, among them swimmer Michael Jamieson and gymnast Dan Purvis.

After winning Olympic silver, Jamieson is certainly the big hope in the pool, where he goes in the 200m breaststroke.

There is plenty of comfort for the organisers, but just how big an impact would the absence of big names make on Glasgow 2014?

Demand for tickets has been huge - there have been around 2.3m requests for around one million tickets - so fans will turn up and the numerous venues will be filled.

Sponsorship also appears to be on track.

From a budget of £524m, organisers had to find £100m of private cash through corporate investment.

That milestone is already close to being achieved.

Major deals with companies like Emirates, Virgin and AG Barr are already in place, while more are expected to follow.

Financially, it seems, the Games are secure.

That eases the cash pressure on major building and renovation work across the city and the 14 venues being used to host the various events.

But with a projected global television audience of two billion, the Scottish government will want the best names at the party.

The political significance of 2014 for Scotland is every bit as important as the sporting one.

Little more than a month after the closing ceremony, the people of Scotland will go the polls to decide whether they want to remain part of the United Kingdom.

Hardly surprising then that, for some political figures, the thought of Glasgow 2014 being anything other than a huge sporting and cultural success is unthinkable.

Scotland may well be denied the Mobot, but it seems the show will carry on regardless.