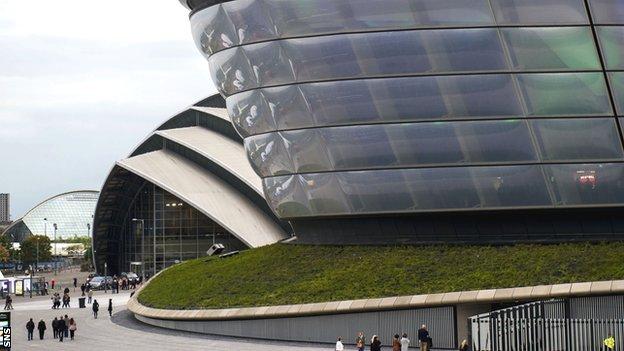 The security company criticised for failing to provide enough staff for the London Olympics has made a bid to be part of the Commonwealth Games when they are staged in Glasgow next year.

G4S bosses admitted the company's handling of London 2012 was a "humiliating shambles".

It had to pay £70m in compensation to organising committee Locog, which used about 3,500 soldiers to plug the gaps.

Commonwealth Games organisers have broken up the security detail for 2014.

As the existing provider of stewarding services at a number of Games venues, we are participating in the process to be included in the framework to continue to provide these services during the Games

They have opted to award contracts to a number of different companies to spread the risk and avoid a repeat of what happened in London.

A G4S spokesperson told BBC Scotland that, with 5,000 staff in Scotland, the company was well placed to bid for Glasgow 2014 security contracts.

"We already work for Hampden Park, Ibrox Stadium, and the new Hydro Arena, and have unrivalled experience at major events such as T in the Park and RockNess," said the spokesperson.

"So as the existing provider of stewarding services at a number of Games venues, we are participating in the process to be included in the framework to continue to provide these services during the Games.

"We can confirm we are not bidding to be part of the guarding framework."

Keith Vaz, chairman of the Home Affairs Select Committee, is adamant G4S should not be bidding for contracts.

He questioned the company's directors over the failure to provide enough members of security staff for the London Olympics.

He said he was "astonished" that they should be bidding and described them as "shameless".

Significantly fewer staff will be required in Glasgow than in London and the overall security budget will be in the region of £90m compared to an Olympic budget of more than £550m.

A Glasgow 2014 spokesperson said the organising committee was "working to support Police Scotland...to deliver a safe and secure Commonwealth Games".

"Learning lessons from previous Games we have offered opportunities to a wide range of compliant providers from the private security industry to contribute to delivering a safe and enjoyable Games experience for athletes, officials and spectators," said Glasgow 2014 in a statement.

"Procurement of security services and assets to support the delivery of the Glasgow 2014 Commonwealth Games is on-going.

"Companies will be considered on their merits and assessed in line with detailed tendering requirements and procedures. No appointments have been made."

Police Scotland have overall responsibility for security at the 2014 Games and control the budget.

Their spokesperson told BBC Scotland: "The Organising Committee and Police Scotland are currently reviewing the tenders for security contracts at the Commonwealth Games venue."

Following the £70m compensation deal with Locog, G4S's chief executive at the time, Nick Buckles, said: "We have accepted responsibility for the security workforce issues and, as a result of the settlement terms which we have announced today, have ensured that the overall cost to the taxpayer has been reduced significantly against the planned cost."

The company has become embroiled in further controversy in recent days over claims that its staff at South Africa's Mangaung prison gave inmates electric shocks and injections as punishment.