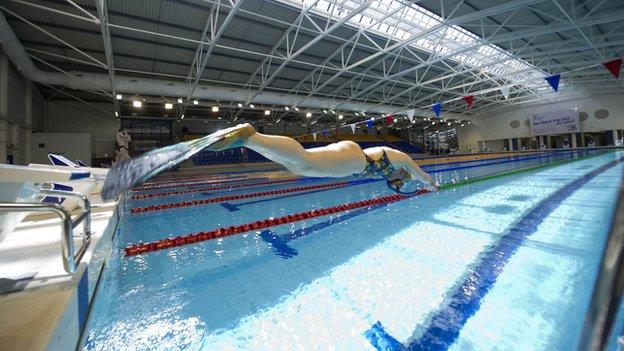 The Commonwealth Games Federation (CGF) has praised Glasgow 2014 organisers for demonstrating "a clear understanding of all aspects of Games delivery".

The Federation has been in Glasgow for a week to assess its preparations for hosting the event next summer.

"We see an increasingly integrated effort with a total focus on delivering the best Commonwealth Games ever," said Bruce Robertson of the CGF.

Responding to the favourable findings of the CGF's Coordination Commission (CoCom), he said: "There's still a lot of work to be done and no sense of complacency on our part.

"We remain very focused, up for the challenge and we look forward to sharing the final stage of a journey towards delivering an outstanding Games of which the CGF, Scotland and Glasgow can be proud.

"We are getting ready to welcome the world."

This visit was the Coordination Commission's fifth meeting in Glasgow to check on progress ahead of the Games that will run from 23 July to 3 August.

In particular, it focused on reviews of transport, security, control and communications, capital works on venues, branding and operations.

Our focus with the organising committee, Glasgow City Council and Scottish Government is now to put the icing on the cake

It heard reports from the organising committee, Glasgow City Council, Police Scotland and the Scottish Government and described the partnership between those bodies as "excellent".

Robertson, Coordination Commission chairman said Games organisers had shown "a clear understanding of all aspects of Games delivery, with detailed plans to meet the needs of athletes, spectators, volunteers and other stakeholder groups".

He added: "Based on our reviews and the comprehensive information provided we are very impressed with progress made since our last Coordination Commission review in earlier in April this year.

"With the Games now just eight months away, the excitement in Glasgow and across the Commonwealth is building.

"The launch of the Queen's Baton Relay has been extremely well received and today the baton is in the Gold Coast - our next Games host in 2018.

"When the baton returns to Scotland on 14 June we know it will start a wave of community celebration, and will reinforce the image of Scotland all over the world.

"The response from the Scottish people to the opportunity of carrying the baton, buying tickets and volunteering has been outstanding.

"Already we know, based on this public response and the response of the corporate community, with 33 commercial partnerships now concluded, that the Games are going to be an outstanding success."

CGF chief executive Mike Hooper acknowledged that Glasgow still had "much to do" in time for the athletes' village opening in mid-July but said that "none of this is unexpected and plans exist to achieve everything needed and to do so in a fiscally responsible manner".

"Our focus with the organising committee, Glasgow City Council and Scottish Government is now to put the icing on the cake," said Hooper.

"The Games promise to be a unique Glaswegian and Scottish experience. These Games will enhance the brand of the Commonwealth Games, and feedback from our discussions with our top athletes in the Commonwealth reinforce that these will be very, very special Games."