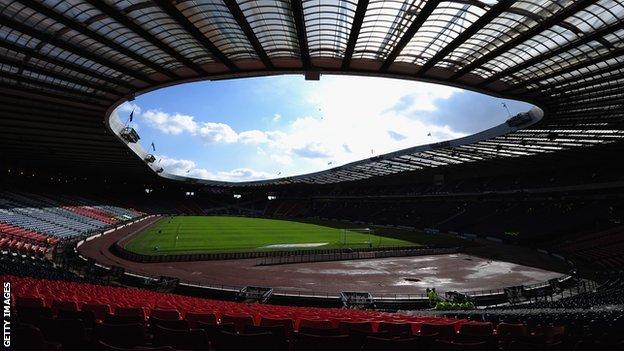 The opening and closing ceremonies will be broadcast live from Celtic Park and Hampden Park.

Over the course of the 11 days of the Games, the BBC will broadcast across all major TV and radio networks, online and on the red button.

There will also be Games-themed programmes across TV and radio.

Bruce Malcolm, BBC's Head of Commonwealth Games, said: "BBC Sport will provide the kind of coverage they did so brilliantly during the Olympics but we also want to join in the year-long celebrations both here in Glasgow and throughout the rest of Scotland by bringing our audiences a string of live events, concerts and Commonwealth-themed programmes.

"Both BBC Scotland and BBC Sport's Games team will be based in Glasgow for the duration, with Pacific Quay acting as our Commonwealth Games broadcast engine room."

Television coverage will feature live sport with presenters at the venues - including Balding, Logan and John Inverdale - and will start each day in BBC Breakfast, before Mishal Husain presents the morning action from 09:00-12:00 BST.

Jason Mohammad hosts from 12:00-15:00 BST, followed by Irvine from 15:00-19:00 BST, with Lineker taking over for the evening show. Mark Chapman will then host a highlights programme with Balding co-presenting from various Glasgow locations.

Radio 5 live will be broadcasting from Glasgow, with Nicky Campbell leading the breakfast coverage from 06:00 BST and Mark Pougatch presenting the live evening coverage.