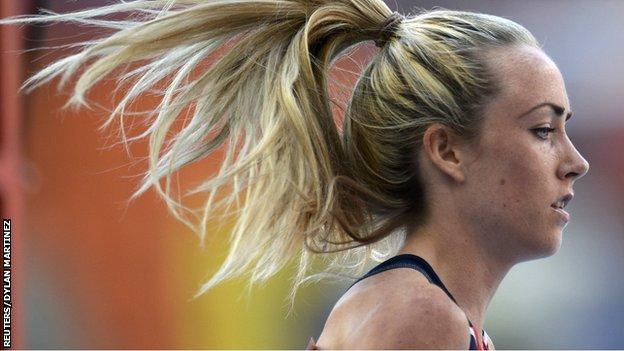 Scottish runner Eilish McColgan believes her intense training regime at a world-renowned high-altitude camp in Kenya could be the difference between winning a medal at the Commonwealth Games and disappointment.

The Carnoustie steeplechaser, who finished 10th at last year's World Championships, is currently training at Lornah Kiplagat's camp in Iten.

It is the third time the athlete has trained in the African country in the past 12 months as she prepares for this summer's Games in Glasgow.

Kenya has long been home to some of the best distance runners in the world, and McColgan hopes training in their back yard can help her bring home a coveted medal in the 3,000m steeplechase.

The Kenyan life is very simple. Eat, sleep, train. There are no distractions like there are back home.

Speaking from the camp, she said: "The Kenyan athletes are amongst the best in the world for middle-distance running so I feel being out here training in their environment and at such a high altitude is a huge benefit to me.

"The terrain is very hilly and rough and so it makes you a lot stronger training at 8,000ft (2,438m) altitude to when you come back down to sea level.

"I really feel it will help me bridge the current performance gap between the European athletes and the Africans."

McColgan's training includes five or 10-mile runs, broken up with intensive training on the dirt tracks around the camp and sessions in the gym.

The accommodation and food are basic, with her diet consisting of rice with meat, kale and ugali. Contact with the outside world is minimal.

McColgan has been in Africa since 2 January and she will stay until next month. The 23-year-old was selected for the camp by UK Athletics and is hard at work alongside six other British runners - Laura Weightman, Michael Rimmer, Muhktar Mohammed, Jemma Simpson, Tom Farrell and Charlie Grice.

On her brief breaks from training, McColgan has so far visited a local wildlife park and St Patrick's school, an institution in Iten that has a proud history of producing some of the best distance runners in history including current Olympic and World 800m champion David Rudisha and former 800m world champion Wilson Kipketer.

Later this month, McColgan - who usually trains at Loughborough University - will be joined at the camp by double Olympic champion Mo Farah, who is preparing for the London Marathon.

She said: "Mo has the London Marathon as his debut this spring and so will be in full marathon training. They obviously won't be training with me but it is amazing to watch top-class athletes and the way they train.

"The Kenyan life is very simple. Eat, sleep, train. There are no distractions like there are back home. It allows you to completely focus on your training and nothing else."

McColgan is currently ranked 11th in the world in the women's 3,000m steeplechase. Five Kenyans, three Ethiopians, a German and a Ukrainian are placed above her.

With the Kenyans allowed to send only three athletes to Glasgow, and the other countries not part of the Commonwealth Games, McColgan is fourth in line.

This has inevitably led to talk of a possible medal for Scotland, and even a repeat of the 1986 Games when her mother and coach Liz McColgan (nee Lynch) won gold in the 10,000m.

Glasgow won't be the first time McColgan has experienced a home games. In 2012, she finished ninth in her heat of the steeplechase competition at the London Olympics.

She said: "I would love to medal. I feel like that is well within my reach. But if I managed to place within my rankings and ran a personal best time I couldn't complain.

"Athletics for me is always about improving year on year. I want to keep making small improvements and taking chunks off my time in order to get faster.

"London definitely came too soon for me. I had gone from racing Scottish Universities to the Olympic Games so it was a huge step up in competition for me.

"I didn't perform very well as I was so nervous but I feel like that will only benefit me going towards Glasgow, having already experienced a home games.

"It's amazing to have someone in the family who has experienced a home games already. It's even more of a benefit to me that she (Liz McColgan) is also my coach. It definitely helps having someone who's been there and done it."

McColgan's training in Kenya coincides with the visit of the Queen's Baton Relay to the African nation.

The BBC presenter Mark Beaumont is following its amazing journey with a series of programmes. The baton will eventually arrive in Glasgow in time for the opening ceremony, where it will play a pivotal role.

With the baton and McColgan well on the road to the games, excitement is building. But how does she intend to spend her last few months before the event?

She added: "I am still unsure as to whether I will run an indoor season. If I come back from Kenya in good shape it's definitely something I will consider doing, but for me outdoors is my main priority.

"I will have another altitude camp in the spring but this will most likely be in North America for a month.

"In order to prepare for Glasgow I might look into going away the month before to an altitude camp in Europe in order to give myself the best opportunity for peak fitness.

"Altitude training is something that needs to be maintained as much as possible, so the more altitude training camps I can be a part of the bigger effect it has on my training and performance."