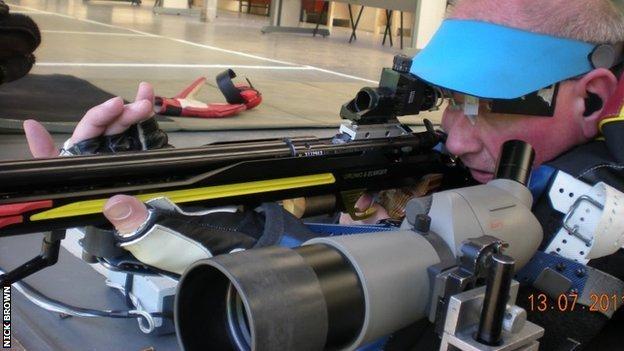 An Isle of Man pub landlord has set his sights on competing at his eighth successive Commonwealth Games.

If selected for Glasgow, shooter Harry Creevy will compete in his final Commonwealths, 28 years after his first appearance at Edinburgh in 1986.

The 58-year-old said: "I started in Scotland almost 30 years ago, so it would be fitting conclusion to my Commonwealth career to finish there."

If chosen, he will represent the Isle of Man in the 50m Prone event.

This has been the Port St Mary landlord's chosen distance for the last 18 years.

He first represented the Isle of Man in 1979 and has competed for Great Britain since 1995 at European and World Cup events.

He has made several finals and even set a British record in Canada in 1994 in his seven previous games, an Isle of Man record, and he says he feels fortunate for the opportunities he has had.

"I feel as though I have been very lucky," he said.

"I started shooting at club level initially then all of a sudden I was competing internationally for Great Britain all over the world.

"I feel honoured to have taken part in the Commonwealth Games over the years".

In the build up to the Games, he plans to compete several European Cup events and the World Championships in Spain, where he will defend his team gold from 2010.

He will also contest the English championships, shortly before the Manx team is announced on 8 May.

"I am hoping to get into the top eight which would give me a medal opportunity. It would be the perfect end to my last year competing at international level."

The Isle of Man will be among 71 competing teams and looking to improve on the medal tally of two bronzes won at Delhi, India in 2010.