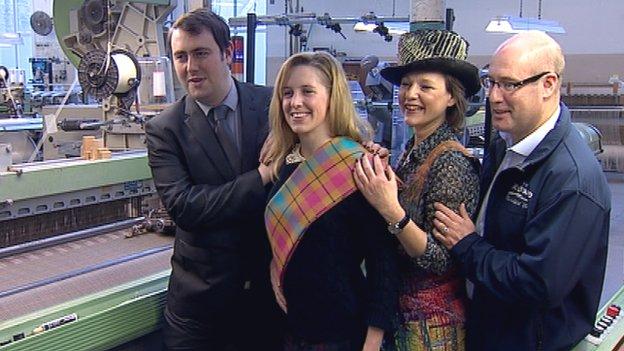 Designer Jilli Blackwood believes she has created outfits that both male and female Scottish athletes will be proud to sport at the Commonwealth Games.

Speaking as the official athletes' bold tartan was unveiled, she suggests previous Team Scotland uniforms have focused on the men's design.

"I felt the women were wearing a female version of the male uniform," she said.

"I thought it was time to bring the women forward and inject a bit of style into their uniforms."

The Scotland outfits for this summer's Games in Glasgow have not yet been revealed.

Textile artist Blackwood maintains she is not permitted by organisers to confirm if the men will wear kilts.

However, that seems likely, with the women wearing a different uniform.

"I am going to make them look marvellous," the Glasgow School of Art graduate said of the athletes.

"It will all be unveiled very shortly.

"We are looking to include bits of the traditional and bits of the new within there so we'll just need to wait and see."

What Blackwood could talk about at this point was her eye-catching tartan, featuring pink, blue and light brown tones, which she describes as "a modern cloth".

"It is not a feminine tartan; it is a unisex tartan," she told BBC Scotland in response to a suggestion that it might be regarded as a colour scheme that would appeal more to women than men.

"It definitely works for both. We are modern Scottish people. I love traditional tartans but we just mustn't get bogged down in them."

Team Scotland's chef de mission Jon Doig described the tartan as "fantastic". It will be worn at the opening ceremony at Celtic Park on 23 July.

"We wanted to bring a real design element to the tartan for the parade uniform," said Doig.

"Inspiration has been drawn from all parts of Scotland, elements of the Scottish landscape and environment. We have drawn down on those things rather than looking at, say, our own team colours."

Blackwood says her main inspiration was the Scottish Highlands.

"The tartan I've designed looks at the Scottish landscape through different eyes," she continued.

"The blue is the spring water of Vatersay Bay in Barra, the caramel colour in the background is the late bracken on the hills when winter is coming.

"The coral and red and pink is the summer hills when heather bursts forth at the end of August. The dark colour, I suppose, is a nod to the Commonwealth Games Scotland corporate tartan."

Designers were invited to apply to design the official uniforms through "an open process".

Doig had seen Blackwood's designs at the closing ceremony of the Commonwealth Games in Delhi four years ago and he and a selection of athletes were impressed with her ideas for the home Games.

"The most important people in this process are the athletes because it's what they are wearing with pride for Scotland in the opening ceremony and all the formal ceremonies," said Doig, who is also chief executive of Commonwealth Games Scotland.

"They will be looking around in the [athletes'] village when everyone else is putting on their parade uniforms and sizing up the opposition and I think they are going to be absolutely delighted."

Olympic and Commonwealth swimmer Hannah Miley called the tartan "amazing" and her comments suggest that Scotland's male athletes will indeed be wearing the kilt.

She said: "This tartan will definitely make the Scotland team stand out. It's the first thing that people notice.

"You instantly know who the Scottish team are because the kilt and the tartan are unique to us and we're very proud of it and it makes you stand tall.

"It's the one part of the kit that quite a lot of people are excited about getting.

"The fact that the designer has made two separate things, for the females in the team it is quite exciting and special. The guys have the kilt and the girls have something special to wear as well."