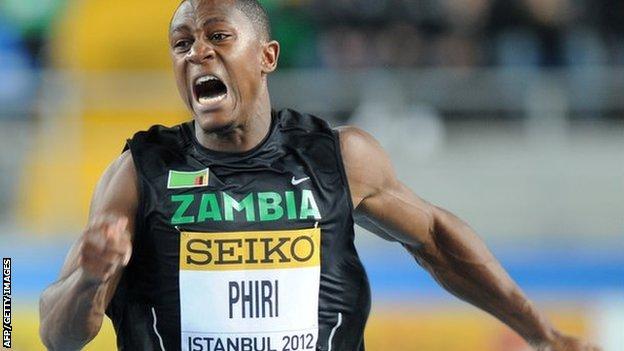 For Gerald Phiri, being the fastest man in Zambia is not enough. He has his eyes set on a bigger prize.

Becoming a household name is the number one target for the 25-year-old and he wants a Commonwealth Games medal to help establish himself on the world sprinting stage.

Now in his second year with an elite training group in Clermont, Florida, Phiri is working with some of the best sprinters in the world as he prepares for both the 100m and 200m in Glasgow.

"I'm in Florida training with Lance Brauman; he has coached a lot of great athletes," said Phiri. "Curtis Mitchell, my training partner, won bronze in the 200m last year at the World Championships in Moscow."

Brauman's extensive resume reads like a who's who of sprinting; Tyson Gay, Nickel Ashmeade, Bernard Williams and Jamaica's back-to-back Olympic gold medallist Veronica Campbell-Brown to name only a few.

Their success is something Gerald appreciates.

"Those are the kind of athletes I am training with, you have to train with the best if you want to be the best," he explains.

"In my old group, if you are the fastest you get very comfortable but when you start running against guys who are running 9.7 or 9.6 seconds, it's a real big eye opener.

"I can talk about Tyson Gay and Usain Bolt all I want but until you actually run with these kind of calibre athletes, you don't really understand.

"I'm at an advantage because I get to train with some of the fastest guys in the world on a daily basis."

Gerald was born in Zambia, but unusually his sprinting story started over 7,000 miles away from his home country in Welshpool, Wales.

I'm holding the hopes of 13 million people on my shoulders which can be a bit heavy sometimes, but at the same time I embrace that and I try my best

As a young boy he moved to the UK after his mother was offered a job as nurse in the Welsh town.

"My PE teacher discovered me," Phiri recalls. "He told me to take up athletics when I lived in Wales.

"We lived there for two years and that's where my athletics career got started, then we moved to Sheffield and my coach took me up to another level."

He excelled, breaking records at school championships and winning gold at the British Schools Championships relay as part of the under-17 team, despite only being 14 at the time.

Gerald was on the move again, this time to Chicago and then Texas as he began a new life in America.

His graduation from Texas A&M University coincided with an appearance at the London 2012 Olympic Games, and his decision to represent his home country of Zambia.

"I was born in Zambia but I spent a lot of time in Sheffield as well, so when it came to deciding whether I wanted to run for Great Britain or Zambia, it was a very tough decision, but it basically came down to what kind of legacy do I want to leave behind," he explains.

"It really pressed on my heart to run for Zambia because I wanted to elevate the sports in Zambia and motivate kids."

He admits feeling both pride and pressure competing for the African nation.

"It's an honour and a privilege any time you get to represent your country, especially in my case where there's not many of us who get the opportunity to run and represent Zambia at the international level.

"I'm holding the hopes of 13 million people on my shoulders which can be a bit heavy sometimes, but at the same time I embrace that and I try my best. At the end of the day all I can do is train hard and try my best and hopefully they'll be proud of me."

Gerald reached the semi-finals of the 100m in London 2012, narrowly missing out in a place in the final by finishing fifth with a time of 10.11 seconds.

And he said: "2012 for me was the beginning, I graduated from university in May and London was my starting point. In the 100m semi-final I placed pretty high overall, I wasn't that far off making the final."

With only two competitive races the following year after a series of injuries, the Zambian is eager to prove he can compete with the best.

"In the past, I showed glimpses here or there but I don't think I really lived up to the early promise," he says. "This year I really want to establish myself as a world contender."

He hopes he can get the chance to compete with Usain Bolt at the Games in Glasgow.

"I really think that Usain Bolt running would be a good thing for the Commonwealth Games," says Phiri.

"He is a great athlete, world record 9.58 seconds, you have to respect what he's done, but you can't be timid.

"You have to get a great start, you have to basically start like Shelly-Ann Fraser and just get as far ahead of him as possible because his speed endurance is just ridiculous.

"My goal this year is to make sure I work on my start if I can at least run that first 70m really fast and hopefully open up space between me and him and just try and hold on for dear life."

The spotlight was shining on Zambia's preparations for the Commonwealth Games as the Queen's Baton Relay stopped for a short stay in the country earlier this week.

In the year Phiri wants to make his mark on the world he knows the Commonwealth Games is the perfect place to start.

"Millions of people around the world are watching," he adds. "It would be awesome to cross the line first in front of all those people, especially in the UK because that's where I started my athletics career.

"I won my first national championship there, I would love to come back and win my first international medal there."