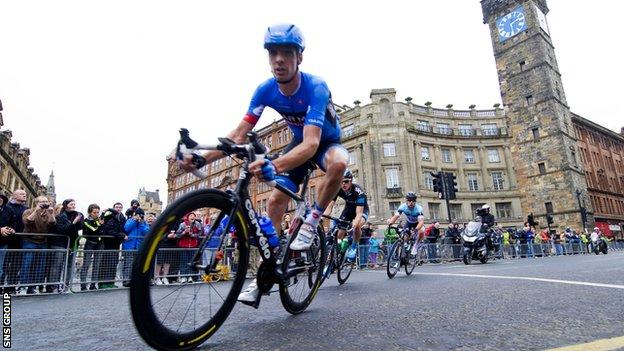 The road race on 3 August will take competitors along Argyle Street and Buchanan Street on a 14km circuit starting at Glasgow Green.

The route also takes in Kelvingrove Park in the city's west end, with men doing 12 laps and women doing seven.

The time trial will take place on 31 July, with the men riding 40km and women racing over 30km.

The time-trial route will be a single loop starting at Glasgow Green and taking in the countryside of East Dunbartonshire and North Lanarkshire.

Scotland's David Millar, who is to retire at the end of the year, is the reigning Commonwealth time-trial champion and has indicated his desire to race on home soil.

Isle of Man rider Mark Cavendish, who won the national championship over a similar course in Glasgow last year, will be a strong favourite for gold in the road race.

However, the participation of both men will depend on their condition at the end of the Tour de France, which finishes on 27 July.

Games' organisers will work with Glasgow City Council and Transport Scotland to minimise disruption on the race days, when temporary traffic changes will be put in place.

Chief executive David Grevemberg said: "These competitions, along with the marathon, are free events to watch without tickets and we would encourage everyone to cheer the athletes on and enjoy what will undoubtedly be a unique Commonwealth Games experience."