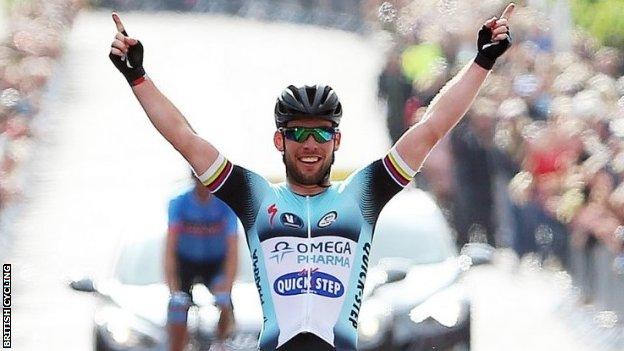 Manx cyclist Mark Cavendish has said he is "super-motivated" to represent the Isle of Man at this summer's Commonwealth Games in Glasgow.

Cavendish is aiming to compete in the men's road race on the course where he sprinted to victory in last year's British national championships.

"I love competing at the Games because it is with all my mates," he said.

"We have been bashing around since we were juniors. It is not that often you can get to represent the Isle of Man - it is nice because I get to ride with guys I have raced with my whole life."

"It is on the course where I won the British national championships in 2013, and the Isle of Man has an incredibly strong team".

Cavendish ended the island's 20-year wait for a Commonwealth gold when he won the 20km (12.4 mile) scratch race in Melbourne in 2006.

He will also have the opportunity to become the Isle of Man's first-ever holder of the Tour de France yellow jersey this summer with the opening stage in Yorkshire suiting sprinters.

The 28-year-old has already won 25 stages of the world's most famous cycling race, putting him third in the all-time stage winners list.

The IOMCGA is a charity responsible for the publicity, fundraising, travel and support for the island's teams at the Commonwealth Games.

Cavendish is likely to be selected in a strong cycling team along with London 2012 Olympic gold medallist Peter Kennaugh and Mark Christian, who won bronze on the track at the 2010 Games in Delhi.