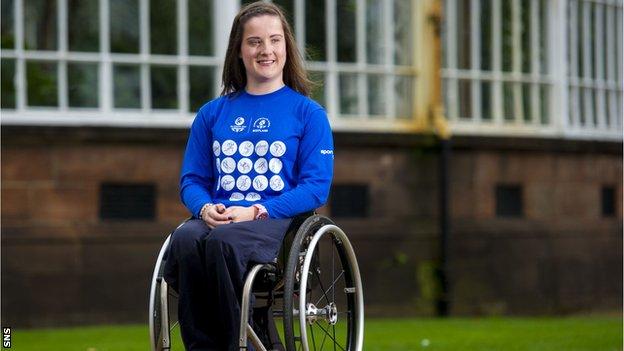 Meggan Dawson-Farrell says a recent injury setback was never going to get in the way of her dream of securing a medal at Glasgow 2014.

The Scot will compete in the Commonwealth Games Para-Sports programme, racing in the 1500m wheelchair event.

And while her preparations have been anything but plain sailing, she is now back on track for glory.

"I got a shoulder injury, got back from that, then I was out training with my dad and got an injury to my forearm and wrist," she added.

"I put my arm through my chair, in my wheel, and I did a full rotation with it stuck. I eventually got it out but thought I had broke my arm because I was in so much pain and couldn't move it. Luckily it was just ligament damage.

"Then recently I had a kidney infection, but I'm back from that.

"I'm hoping that's me had my problems and I can now concentrate on training and racing for the Games."

This will be Dawson-Farrell's first Commonwealth Games.

And when asked what kept her spirits up after the injury, she said: "Knowing that once I'm fit again I'm getting back to what I love doing. Knowing that I get so much enjoyment out of it, and knowing the Games are coming up."

The Scot is considered a major medal contender and she is determined to secure a place on the podium.

"It would be lovely to get a medal at a home Games, and we're going for it, but if not I'll have done what I could on the day.

"It's a home crowd and it's the biggest event I'll have done to date, so just having that will be an experience in itself."