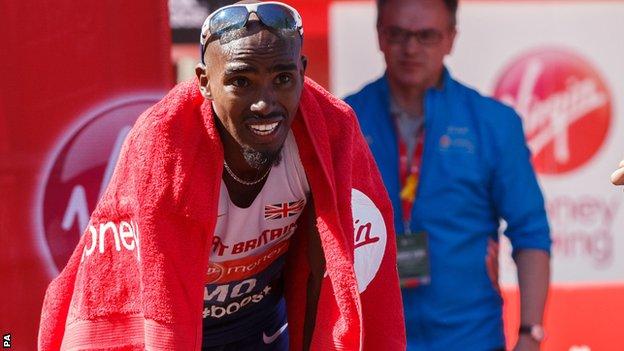 "Hi guys! I will be running in the Commonwealth Games this year. See you in Glasgow," he tweeted.

Farah, 31, was eighth in April's London Marathon and was undecided whether to return to the track in Glasgow.

His coach, Alberto Salazar, advised him not to run any more marathons until after the 2016 Rio Olympics.

The announcement is a boost to Games organisers, with Britain's Olympic heptathlon champion Jessica Ennis-Hill absent because she is expecting her first baby and sprint champion Usain Bolt yet to commit.

Despite finishing four minutes behind winner Wilson Kipsang in the London Marathon, he said immediately after the race that he intended to run more events over the distance.

Farah is scheduled to run in a special event at the Diamond League meet in Glasgow on 12 July, with the Commonwealth Games commencing 11 days later.

Farah finished ninth in the 5,000m in the 2006 Commonwealth Games in Melbourne, but withdrew from 2010 event in Delhi, India due to fatigue.

His experiment over 26.2-miles has led to speculation he may attempt the 10,000m and marathon double at the Rio Olympics.