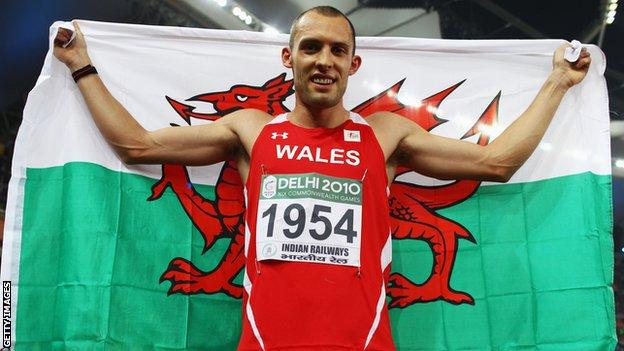 Sport Wales has set a target of winning 27 medals at the 2014 Commonwealth Games in Glasgow.

Wales claimed 19 medals, including three golds, in Delhi four years ago but have raised the stakes this time.

Sport Wales chief executive Sarah Powell said: "This is a bold ambition and rightly so. It reflects our aspiration to be a nation of champions.

"Wales has enjoyed an unprecedented amount of success since the last Games and we want to continue that momentum."

However, the figure of 27 medals is eight less than Sport Wales originally outlined in 2010 for the Glasgow Games.

The targets for each sport have been agreed with the executives and coaches from those disciplines, with swimming taking the lead as they aim for six medals.

Athletics has targeted four medals, cycling and gymnastics three, two apiece for boxing, shooting, disability sport and bowls, with judo, weightlifting and triathlon aiming for one.

"We all know that we cannot control results and medals, but we can do everything possible to help get our athletes competing at the highest level and getting to finals where they have every chance of winning medals," Powell said.

"It's about preparing our athletes to the very best possible standard.

"We do need to remember, of course, that winning in elite sport takes investment and is resource-intensive.

"There are no real shortcuts available and the investment to support an elite performer is the same, whatever the size of the nation, which does make it even more rewarding for us as a smaller nation when we excel."

A long-term aspiration for Wales is to take the number one spot in the medals per head of population table.

"Being small unites us and drives us on to success," added Powell. "Our athletes belong on podiums. We expect to win and we expect to break records."