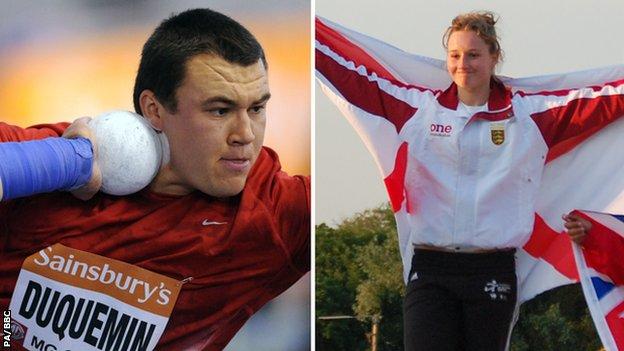 Jersey have named a three-member athletics team for the Commonwealth Games in Glasgow.

The team will be led by 23-year-old Zane Duquemin, ranked number one for Great Britain in discus and shot put, and coached by Andrew Winnie.

Duquemin will be joined by his sister and discus thrower Shadine -

Zane Duquemin has been selected for both his events, will prioritise the shot put and represents one of Jersey's best chances of a medal in Glasgow, having also represented the island in Delhi four years ago.

His personal best of 19.42m is almost three metres further than the qualifying distance needed by a Jersey athlete.

His 19-year-old sister is the England Under-20 and Under-23 discus champion and won a silver medal at the 2011 Commonwealth Youth Games in the Isle of Man.

Phelan, 28, made his Jersey senior debut in the 2001 Island Games at the age of just 14 and achieved the high jump qualifying standard twice last year, with a best jump of 2.16m.

The PhD student at Birmingham University jumped 2.05m at the Commonwealth Games in Melbourne in 2006, missing out on a place in the final.