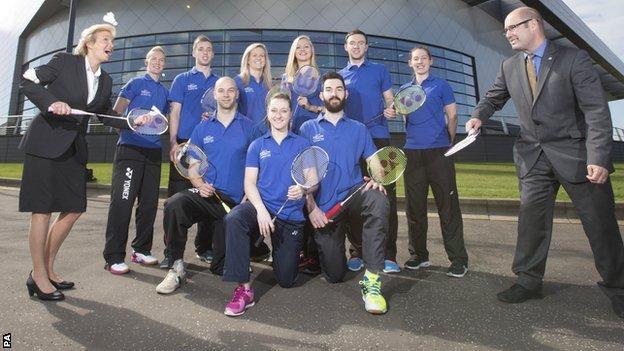 Rebekka Findlay and Caitlin Pringle's participation in the Commonwealth Games this summer will be restricted to the badminton team event for Scotland.

Badminton Scotland had appealed against Commonwealth Games Scotland's original decision to rule the 20-year-olds out of playing in the individual events.

However, the organisers have rejected the appeal, a decision that means Edinburgh's Jillie Cooper cannot now partner Pringle in the women's doubles.

Erskine's Findlay and Pringle, from Glasgow, are the only two members of the 10-strong Scotland squad who will not compete for individual medals.

The pair are 96th in the latest Badminton World Federation rankings for the women's doubles.

Anne Smillie, chief executive of Badminton Scotland, said: "Obviously we are disappointed for the girls. We thought we had presented a strong case for their inclusion in the individual programme, especially as there were no costs involved.

"Now, instead of playing a full part in Glasgow 2014, they will just feature in the team event.

"I think we are missing a big opportunity to help with not just their international development but the chance to develop a well-balanced and strong squad going forward into next season's big challenge.

"But, of course, we have to respect the appeals panel's decision. They listened to the arguments put forward but decided that the original decision was consistent with Commonwealth Games Scotland's selection criteria.

"We have to accept that and now put our energy and focus into managing our expectations at Glasgow 2014.

"Caitlin and Rebekka are naturally disappointed, but they will need no convincing that they still have a big part to play in the team event and in helping the other team members prepare for the individual campaign."