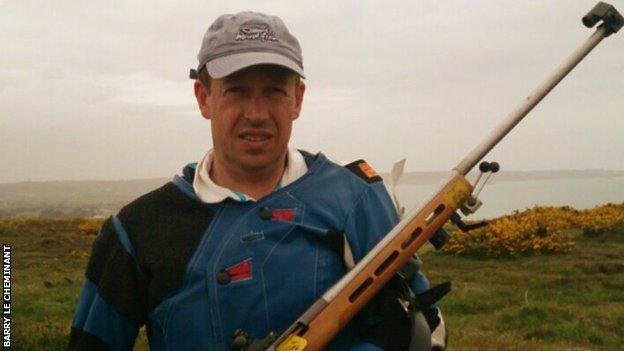 The 49-year-old has been selected for the island's seven-strong shooting team for Glasgow 2014.

He will shoot with Daniel Richardson in the fullbore events, having previously competed at Edinburgh in 1986.

David Turner, Richard Bouchard and Steve Le Couillard are in the smallbore team while pistol shooters Nikki Holmes and George Winstanley are selected.

"It's a bit of a lay-off," Le Cheminant told BBC Sport.

As an 18-year-old, he missed out on a bronze medal in the individual event by just one point in the 1982 Games at Brisbane, finishing fourth behind Guernsey's Charles Trotter, before teaming up with Cliff Mallett to end the pairs event in 11th place.

However, he then decided to put family first ahead of his sport.

"I took time off as my children were growing up," he said.

"Spending half a day or a day at the range, it does impose on your family time. I wanted to be there when the children grew up.

"Thankfully shooting's a sport that, all being well, one can come back to at a later stage, although it's been a bit longer than I envisaged."

The stockbroker's children are now 24 and 22 and he has re-dedicated himself to shooting, although his love of the sport never disappeared in the interim.

"When the Bisley main meeting was on in the summer for a week in July, I was always desperate to see the scores because it's something that's been of great interest for me," he explained.

Fullbore shooting is one of Jersey's leading sports when it comes to success at Commonwealth Games.

The island's most recent medals were won in Auckland in 1990 when Colin Mallett took individual gold before teaming up with his father, Le Cheminant's former partner Cliff, to win pairs bronze.

"We had the militia here, my great-grandfather won a shooting cup with the Royal Jersey Infantry in the 1880s.

"The local range is deemed to be one of those most similar to the range we'll be competing on in Scotland.

"We've just had the Welsh Commonwealth Games team over for three days to get the experience of shooting on a coastal range because the range we'll be shooting on in Scotland is also coastal so it's perfect for practise."

But will Le Cheminant carry on until Gold Coast 2018 and therby complete a unique double of two Australian and two Scottish Commonwealth Games three decades apart?

"That would be great, but it's a long way away," he added.

"I think I'll have to see what happens after this one, relax a bit and get my weekends back and see where I go from there."