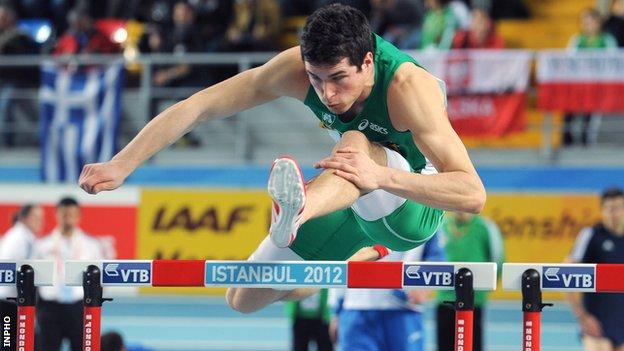 Holywood athlete Ben Reynolds produced encouraging form as he clocked a wind-assisted 13.59 in a 110 metres hurdles race in Gothenburg on Saturday.

The time was .10 outside the Northern Ireland record Reynolds set last year.

However, it will not be registered as a season's best for the fourth-placed Reynolds as the wind speed of 2.8 was over the 2.0 limit.

The Grand Prix race was won by 2008 Olympic champion Dayron Robles of Cuba in 13.30.

Russian Konstantin Shabanov took second in 13.41 and Germany's Eric Balnuweit was third in 13.49.

Reynolds believes he is capable of running in the "low 13s" this season and is unlikely to be overly impressed with his performance on Saturday.

However with his season's best 13.79, the Swedish run suggests Reynolds is making steady progress as the season builds up to his challenges at the Commonwealth Games and European Championships.

Next weekend, Reynolds will run for Ireland in the European Team Championship meeting in Estonia.

Meanwhile, Waterford athlete Thomas Barr moved to the top of the 2014 European 400m hurdles rankings as he improved his Irish record in Geneva on Saturday.

The time cut .71 off Barr's previous Irish mark set two weeks ago. Barr now could be a medal hope for the European Championships in Zurich during August.