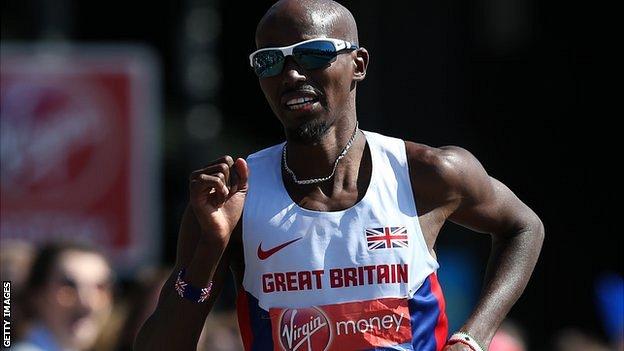 England have confirmed that double Olympic champion Mo Farah will compete in both the 5,000m and 10,000m at the Commonwealth Games in Glasgow.

BBC Sport revealed last week that Farah would run in both events.

The 129-strong team includes Olympic long jump champion Greg Rutherford and Christine Ohuruogu, although she will only run the 4x400m relay.

Morgan Lake, 17, will compete in the women's heptathlon, but there is no place for sprinter Chijindu Ujah.

He ran the 100m in 9.96 seconds at the FBK Games in the Netherlands earlier this month, but BBC Sport understands he was not considered for the individual 100m because his effort came after the qualification cut-off period ended on 1 June.

The 20-year-old Londoner's coach was asked whether he wanted to be considered for the 4x100m relay squads, but Ujah wants to concentrate on the European Championships, which begin in Zurich shortly after the Commonwealth Games.

Adam Gemili has been selected for the 100m, along with world indoor 60m champion Richard Kilty.

Gemili believes running under 10 seconds will be the aim in order to be in with a chance of the podium.

"I finished last year as one of the quickest in Europe, so I do see myself in the mix for a medal maybe," Gemili said.

The 31-year-old Farah, who also won gold in both the 5000m and 10000m at the World Championships last year, made a winning return to the track in a 5,000m race in Portland on Sunday.

Ohuruogu, 30, who won 400m gold at Beijing in 2008 and silver at London 2012, has been struggling for form and finished last in the 400m at the Diamond League meeting in New York on Saturday.

With Jessica Ennis-Hill pregnant and unable to compete in Glasgow, Lake joins Katarina Johnson-Thompson and Jessica Taylor in the heptathlon.

The teenager is hoping to become the youngest track and field athlete to win an individual Commonwealth Games medal for England.

Johnson-Thompson, 21, admits it would be a "disappointment" not to win gold. She said: "I think this is a breakthrough year for me - a few years ago I felt like I was totally to new to all this."