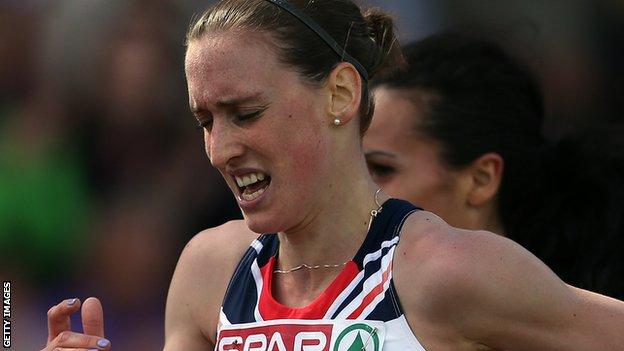 Morpeth's Laura Weightman wants to build on her 1500m Olympic final experience in 2012 with a medal position at the Commonwealth Games.

The 22-year-old posted a personal best 4:02.72 at May's Diamond League meeting in Oregon ahead of July's event.

"One of my main goals before was to make the Commonwealth Games squad," Weightman told BBC Newcastle.

"Now I have to be realistic with my goals but I would like to go there and target a medal in the final."

Weightman had a tough year in 2013, with a foot injury at the British trials hampering her efforts at the World Championships in Russia last August.

However, a return to form in 2014 has given the Leeds-based middle-distance runner confidence for the rest of the summer.

Weightman has both competed and trained in the United States as part of her link with a sportswear company.

She and a number of other athletes spent three weeks in May at Park City in Utah for training in the prelude to Oregon's Prefontaine Classic.

"I quite enjoy pre-season or in-season going away and doing a block of training," Weightman continued.

"It really focuses you on getting prepared for the season and takes away from distractions that can take away from your performance.

"It's quite nice to be away with like-minded athletes so you can prepare, rest and recover properly so that when you do race you are ready to go.

"The weather can be so unpredictable when you're in the UK so it's nice to just to go away and have guaranteed good weather."