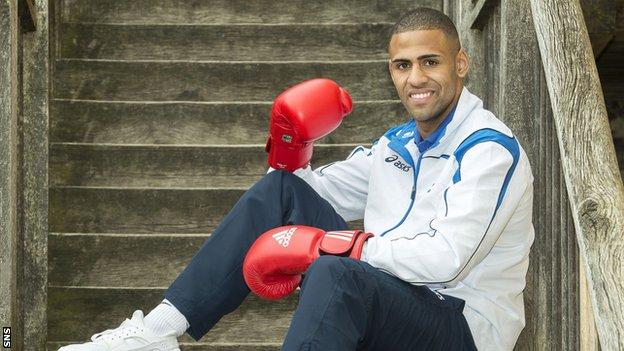 Lewis Benson is confident a Scottish boxer can pick up another Commonwealth Games gold medal at Glasgow 2014.

Scotland have won medals in the ring at every Games since its inception in 1930, including gold at five of the last six.

The Edinburgh fighter - who will battle it out in the 69kg category - expects another successful year.

"To other people it'll be a big shock but I've seen what everyone is capable of doing in the team," he said.

"The medal hopes are Joe Ham and Josh Taylor, however we've also got a bunch of boys in the team that just came on to the scene.

"We've all been doing really well at tournaments. It wouldn't surprise me if any one of us won it because everyone is in cracking form.

"Everyone's really ready for these games. I know everyone's more than capable of winning."

Benson was part of the Scottish team that embarked on a gruelling training camp in Australia as they prepare to step in front of their home crowd.

"I was there for three weeks," said the 22-year-old. "A training camp which was really good and then I had two fights. I won both.

"Before I know it the Games will be here and I'll just have to do what I do best. I know for a fact I'll get nervous, I get nervous before all my big fights, but I need to try and keep on top of them and don't let it bother me.

"I know what's at stake. I just need to be ready.

"I've had a look at my possible opponents. The main one is Wales' Fred Evans, the Olympic silver medallist.

"He's the main threat, he's a talented guy, but in boxing anything can happen.

"There's always an underdog and the underdog can always win. I'm used to that, I just like proving people wrong."