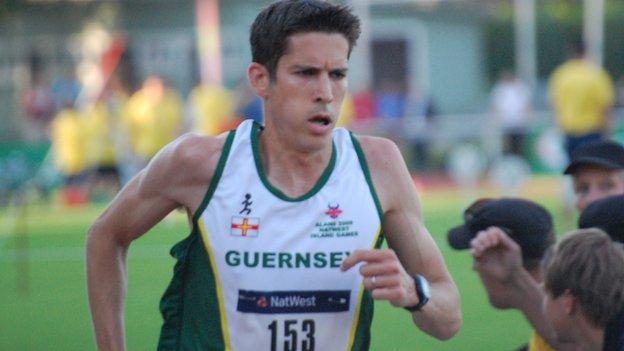 Guernsey's Olympic marathon runner Lee Merrien has pulled out of this summer's Commonwealth Games in Glasgow after getting a stress fracture in his back.

The 35-year-old was aiming to represent Guernsey for the fourth time at Commonwealth Games level.

Glasgow 2014 was going to be his first major event since London 2012 after with a hip injury.

"I'm absolutely gutted I won't be in Glasgow," Merrien said on Twitter.

"After a tough year in 2013 I was finally getting myself into shape at the right time, only to be blindsided by an unexpected injury whilst away," he added.

As well as racing at the 2011 World Championships and 2010 European Championships, Merrien has competed over shorter distances at the the last three Commonwealth Games for his home island.

The injury means Merrien cannot run for six weeks, with the marathon due to take place on 27 July.

"We've lost a British Olympian and one of the people who would have been so useful for the team, and also for Guernsey and possibly even England," Guernsey athletics team manager Dave Legg told BBC Radio Guernsey.

"My initial thought for Lee was 'let's see if he can be top Brit again', which I was sure he could be. Then a chance of a medal? Why not in a marathon? The time that Lee has run is capable of a medal position.

"Now we've lost him we're going to lose his experience and advice as well - which is a shame for the team."