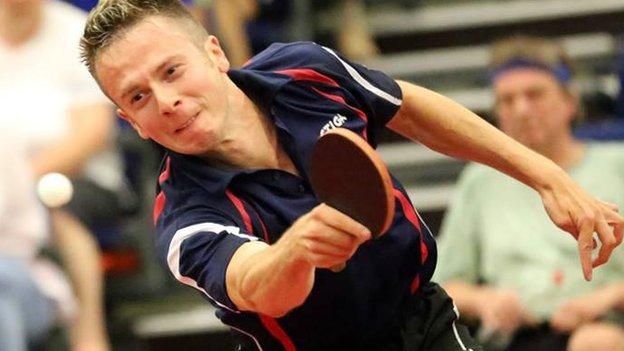 England's most successful Commonwealth Games table tennis player Andrew Baggaley has said he can improve his medal haul at Glasgow 2014.

"I will have played at four and it's part of my legacy really," the three-time English champion told BBC Sport.

"Winning those medals has been a massive part of my success. I'm thankful that table tennis has been part of the Commonwealth Games."

Have bus pass will travel

Baggaley was awarded a giant bus pass in his hometown of Milton Keynes last week to use on a national coach service as part of a sponsorship deal.

"I use it to get to the airport and training camps. It's a big pass, but I don't have to carry it around with me."

Table tennis was first introduced to the Games at Manchester 2002, where Baggaley won two golds, before adding a silver at Melbourne 2006 and a silver and bronze at Delhi 2010.

"I was 19 back in Manchester and winning two gold medals was spectacular," the Milton Keynes player said.

"I was national champion as well so I have fantastic memories - winning on home soil was amazing.

"That was 12 years ago and I can't believe I'm competing in 2014. If I compete to my best I can add another medal to my tally."

Although medals should be easier to come by in Glasgow with table tennis superpower China out of the equation, Singapore remain the number one nation at the Games.

"The world championships are so difficult with the Chinese and other Asian countries," said Baggaley.

"The Commonwealth Games is a massive opportunity for English players to win medals."