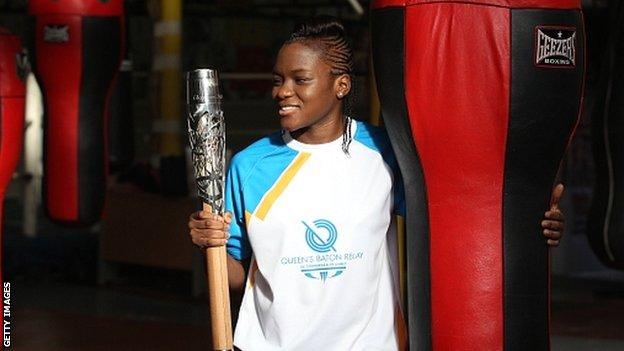 I thought I saw Nicola Adams frowning once but I must have been mistaken.

"Me getting caught without a smile?" she says. "I'm not sure about that."

Better to be famous for your smile than for your frown. But fame has the unfortunate side-effect of wiping smiles from the most joyful of faces - what made you famous can grind you down and the limelight can melt you.

So it is heartening to report that Adams, 31, appears not to have changed one jot. She didn't stop smiling throughout London 2012, where she became the first female boxing champion at an Olympics, and she's still smiling now, even when describing how it felt to lose her first fight in 23 months.

"I'd forgotten what it was like," says the 5ft 3in fighter, who was beaten in the quarter-finals of the European Championships in Bucharest last month. "It was controversial - a lot of people thought I had won. But it was still quite strange. I was quite angry and upset at the time. But it's been a blessing in disguise."

Adams, who starts her Commonwealth Games campaign on Monday, was so angry and upset she suggested on Twitter that she might turn pro - before calming down and remembering she had yet more history to make in the amateur game.

"If I wanted to go pro and be big-time, I could and I would," says Adams, ranked the best women's flyweight in the world. "There's a gap in the market and if a big name were to go professional it could change everything for women's boxing. But I've still got dreams as an amateur and I'll wait to make any decisions until after the 2016 Olympics in Rio."

Having announced itself to the world in glorious fashion in London - along with Irish sensation Katie Taylor, the Ali-shuffling Adams did most to persuade the sceptics that females can whack and weave as well as males - women's boxing is making its debut at the Commonwealth Games in Glasgow. Having already won Olympic, world and European medals, it is Adams's chance to complete the set.

Adams will be representing England in the flyweight category - fellow Olympians Natasha Jonas (lightweight) and Savannah Marshall (middleweight) are also part of an 11-strong England team, male and female. And the bonus of being little is that you get to fight for gold first and steal most of the headlines.

Adams says being the face of women's boxing in Britain is without its downsides. But when pressed, she does concede that fame can skew the attitudes of those around her - including hard-up relatives she thought she never had.

"I haven't let anything change me," says Adams, who joined Burmantofts Amateur Boxing Club in Leeds when she was 12. "I'm still Nicola Adams from Yorkshire, I still walk my dog in the same field I always have done.

"But some people do change towards you. After I won gold in London, people I'd never met before would come out of nowhere and tell me they were my cousin.

"So it's helped me work out the people who are real - my friends and family - and the people who are fake. Don't get me wrong, there are times when it's really cool being treated special. But mostly I just like being what I was."

Adams admits to being taken aback by the sometimes forensic fascination in her private life - "Everyone wants to know everything. 'What's your favourite colour? What's your favourite food?'" - but has managed to translate some of the more intrusive interest into something positive and meaningful.

In the same year as her Olympic triumph, Adams was voted the most influential LGBT (lesbian, gay, bisexual and transgender) person in Britain in The Independent. Her announcement that she was bisexual was met with a shrug by most people, at least those who noticed. But she describes being out as "incredibly liberating".

All this acclaim and hobnobbery with the great and good would spoil a weaker woman. But despite all the red carpet and chat show appearances, globetrotting for charitable causes - spawning numerous selfies with Prime Minister David Cameron - Adams remains an athlete first and foremost.

"I'd love to do more acting," says Adams, a former Coronation Street extra. "But I couldn't be an extra any more - people would be like 'hey, there's Nicola Adams having a pint in the Rovers Return!' It wouldn't quite work!

"But boxing is my passion, who I am, and I never get bored of it. There are times when my alarm goes off in the morning and I don't want to get up and go for a run. But while I'm lazing around, my opponents are envisaging how to beat Nicola Adams. That's what gets me out of bed."