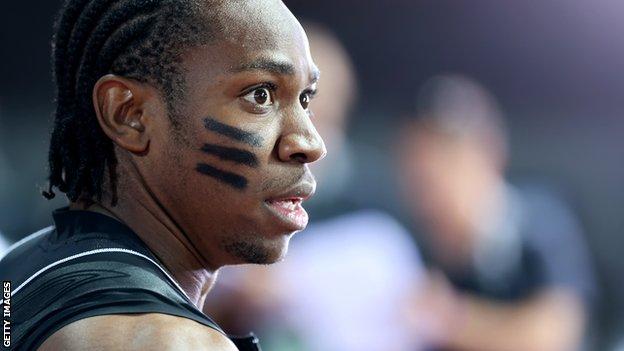 Jamaican sprinter Yohan Blake has apologised to Scotland for deciding not to take part in the Commonwealth Games in Glasgow later this month.

The double Olympic silver medallist said he could not put his preparations for Rio 2016 at risk.

"Of course I'm disappointed to be missing out on Glasgow 2014 but it's in my best interests," he said.

"I'm trying to be positive and there will be many more Commonwealth Games to look forward to."

The second fastest man in history is in Glasgow this weekend for the Diamond League meeting at Hampden, and races in the 100m on Friday.

Blake has only recently recovered from a succession of hamstring injuries and claims he would not be fit enough to realistically compete for his first Commonwealth medal.

"I'm sorry I'm not going to be here, the Scottish people have really been looking out for me," he said. "But they understand the level of competitive person I am.

"It was a tough decision to make, but when I was talking to my manager and my coach they both said I had to get back to the level I was at before.

"There are the World Championships and Olympics coming up in the next couple of years and I have to be at my best for that."

His manager, Cubie Seegobin, insists the reluctance of both Blake and fellow Jamaican Usain Bolt to take part in Glasgow 2014 is not a slight on the championships.

"We made a decision based on Yohan's condition not to compete at the Commonwealth Games and that was in his best interests," said Seegobin.

"As you can tell from last week in Lausanne [where Blake finished sixth in the 200m], we can't tell exactly where he is coming off the injury.

"People forget that Yohan hasn't competed at this level since 2012 in Brussels and he is trying to find his way back. He's in great shape now and is not hurt or anything like that.

"But, if he had gone to the Jamaican trials and not made the team, you guys would be saying he wasn't in shape. So it has taken him a little while and it is his decision. It's nothing against the Commonwealth Games. He has to do what is in his best interests."

Blake added: "Usain is a competitive guy and always wants to do more events, but he made the decision to compete only in the relay after I'd left camp so I don't know what happened. It was up to him and his coach."