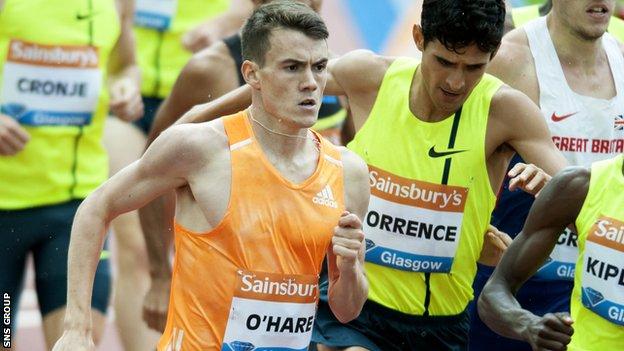 With the Commonwealth countdown in full swing, many of Scotland's top athletes got a first taste of what Hampden has to offer at the weekend's Diamond League meeting.

The roar from the stands may not quite have matched the decibel levels normally associated with the national football stadium.

However, several strong performances, a first look at the transformed arena and the prospect of near full-houses each day has certainly whetted the appetite ahead of the week-long sequence of track and field events that begin in Glasgow on 27 July.

Team Scotland's poster girl Eilidh Child stormed to victory on Friday, smashing her season's best in the 400m hurdles in a time of 54.39 seconds, only 17 hundredths outside her personal best.

The applause was warm and hearty as Child crossed the finish line almost a full second ahead of US favourite Cassandra Tate.

With the home crowd behind her once again next month, the 27-year-old from Perth will hope to go one better than her silver medal from Delhi four years ago, although there will be pressure from Jamaica's Kaliese Spencer.

The spectators were again heavily involved during the 1500m as Chris O'Hare and Jake Wightman came fifth and sixth respectively, both setting new best times of 3.35.06 and 3.35.49.

O'Hare's strong finish caused a real stir as he came from the back of the field over the last 700m to rub shoulders with the front of the pack, who were led home by reigning Commonwealth champion Silas Kiplagat.

O'Hare was delighted with his first Hampden experience, a welcome achievement since his return from injury, which prevented him from competing in the British Championships.

O'Hare's performance may well have done enough to secure a spot at the European Championships in Zurich next month.

After dipping under the two-minute mark during the last Diamond League in Lausanne, Sharp looks in great condition after her injury troubles.

However, there are concerns regarding an open wound which has been left in her ankle following surgery and she will now face daily first aid challenges, not ideal preparation for the European champion.

In the 3000m steeple chase, Eilish McColgan achieved a season's best of 9.44.69 despite continuing issues with her hurdling technique over the water jump.

The 23-year-old from Dundee has battled against an undiagnosed irregular heartbeat which resulted in hospitalisation earlier this year, but came out fighting on Hampden's temporary Mondo track, which promises lots of fast times at the Games.

With African runners expected to dominate her event, McColgan is unlikely to emulate the 1986 success of her famous mother but it won't be for lack of application and determination.

And Clegg, who has recently paired up with new guide dog Hattie, (Scotland's newest Commonwealth squad member) is determined to add to her medal collection.

Despite the stadium only reaching a quarter of its capacity over the weekend, the athletes were full of praise for the atmosphere and the level of support coming from the stands.

After a highly successful trial event, organisers can confidently predict Hampden will put on a cracking show and if home stars deliver on the promise shown then those football crowds may just get a run for their money.