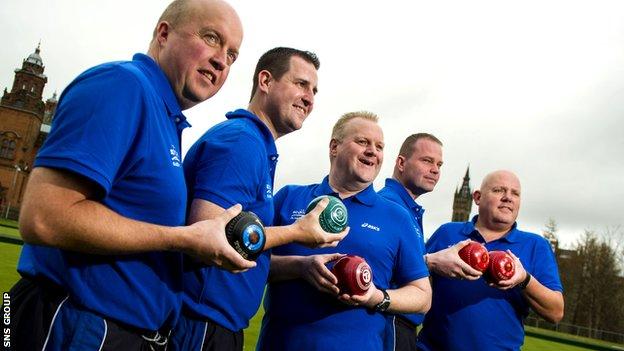 The 41-year-old from Troon has a gold medal from the pairs event in 2006 but the Scots bowlers came home from Delhi empty-handed four years ago.

"I know there's a lot of expectation but I firmly believe that we can come away with gold medals," said Foster.

"People are saying there will be a lot of pressure on us but I've always said that you bring pressure on yourself."

Foster has a string of titles to his name, including four victories at the World Indoor Singles Championship, and he is determined to add to that tally when he steps out at Kelvingrove as part of the 10-strong Scottish contingent later this month.

"Up until 2011, before the season started, I had four world titles, and I've now got 11," he told BBC Scotland. "It's been a phenomenal three years and it's a time that I'll never forget."

No stranger to competing with the best, Glasgow 2014, where he will take part in the pairs and fours, will be his third Commonwealth competition.

It was in Melbourne that his greatest achievement came, when he took first prize alongside partner Alex Marshall.

And it is the memory of that win that spurs him on to go for more glory.

"It's always good to get any medal at a Commonwealth Games, but to get a gold is a dream come true and I'm lucky enough to have that," he said.

Going into the Games, the man who spends his time as the co-owner of a taxi firm when he is not perfecting his aim on the green, had a brief scare when his bowls were stolen from the club he trains at in Ayrshire.

But, thankfully they were soon recovered by police and his preparations were quickly back on track.

Foster may be one of the most recognisable names in his sport and have accolades such an MBE to his name, but there was a time when picking up his bowls was the last thing on his mind.

And, as the Troon native explained, he has his very determined father to thank for setting him on the path to success.

"I first started playing when I was 12 years old, which was 29 years ago, believe it or not," he joked.

"To be honest, I didn't actually want to play bowls - I was more interested in football at that time.

"It was my father who got me involved, but I tried it once because he kept pestering me to do it and I loved it.

"It's been great for me, so I've certainly got no complaints about the game."