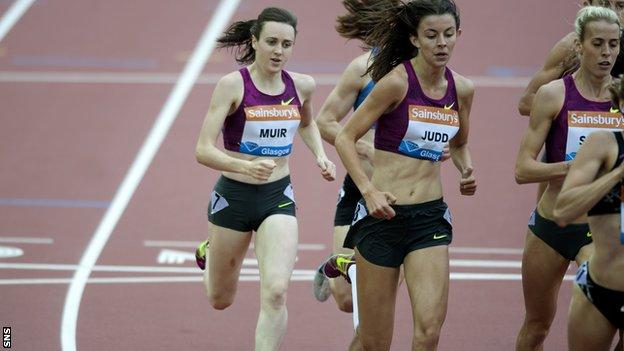 Laura Muir could take on fellow Scot Lynsey Sharp over 800m in the Commonwealth Games.

However, she insists it will come down to how much she has left in the tank after racing in her favoured 1500m.

Last week, Muir broke the Scottish three-and-three-quarter laps record, held by Yvonne Murray since 1987, and took on Sharp over 800m at Hampden.

"I really enjoy it," she said. "It keeps you on your toes a little bit getting to experience both races."

Muir's personal best over two laps is 2:00:80, which was short of Sharp's time at the Diamond League event at the weekend. Both would need a quicker time in order to get on the podium in Glasgow.

A duel between the two would bring back memories of when Scottish duo Murray and Liz McColgan produced an enthralling on-track rivalry in the 1980s and 90s.

"It's great that I have the ability to do both, and it's great that there's so many other athletes in Britain that are so strong in both of those events," Muir told BBC Scotland.

It felt a really quick track. There's going to be an awful lot of fast times run in the Commonwealths.

"The Games have been a long time coming. I never realised that I would actually be competing.

"Having that home crowd behind me - I'm really looking forward to it and it should be really good.

"It felt a really quick track. There's going to be an awful lot of fast times run in the Commonwealths, so that'll be great for the athletes and the spectators."

Muir has also been selected alongside six other Scots to race for Great Britain and Northern Ireland at the European Championships in August.

"I'm really pleased," she said of the August event in Zurich. "It's exciting, a really great team.

"I'm really, really looking forward to it and it's great there's so many other Scots in the team as well.

"We've got a lot of younger athletes - Jake Wightman and Jax Thoirs - that are just coming through.

"Then you've got more experienced athletes like Eilidh Child as well, so it's a great mix."

The Glasgow University veterinary student also revealed she will be sharing her Commonwealth Games experience with her lecturer, Hayley Haining, who will be competing in the marathon.

"It's going to be quite nice having a familiar face there," Muir said. "It's nice to have someone who is hoping to do the same career as me and can do the running alongside it as well.

"My heats are the next morning so I'll just need to watch on TV, but I'm sure she'll do well."