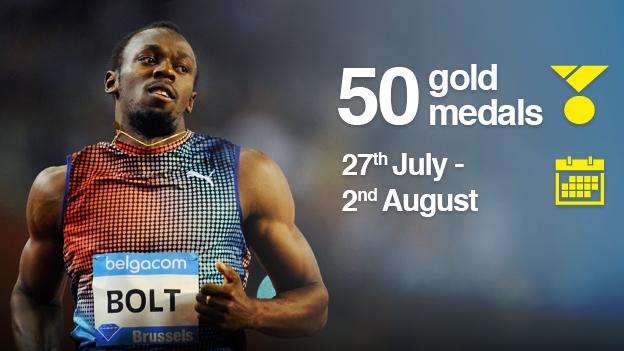 Track and field athletics has appeared in every Commonwealth Games to date. Unsurprisingly, given there are 50 gold medals on offer, it will have the greatest number of competitors with over 1,000 athletes descending on Hampden Park.

In the absence of Mo Farah and Katarina Johnson-Thompson, who are out through illness and injury, England will be looking to the likes of 100m hurdler Tiffany Porter and London 2012 long jump gold medallist Greg Rutherford to win medals.

Kenya's David Rudisha is back on British soil two years after lighting up London 2012 with his world record run to win 800m gold.

The list of para-sport events has been tweaked and now features 100m and 1500m races for both sexes, plus men's discus and women's long jump.

Nigerian high jumper Emmanuel Ifeajuna was the first black African to win a gold medal at a major international sporting event when he triumphed at the 1954 Games in Vancouver - and he did so wearing one shoe.

He didn't compete again and got involved with politics - inadvertently starting a civil war and later being executed for trying to stop it.