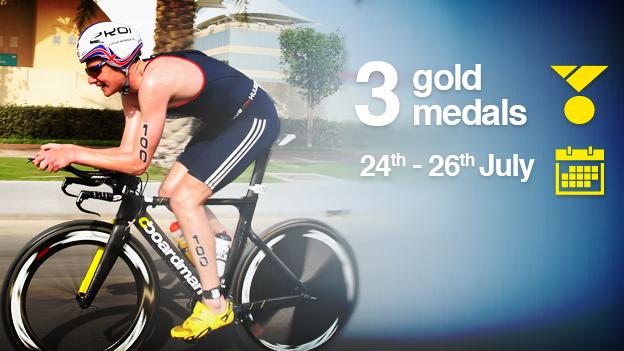 Swim, bike, run - in that order. A race combining a 1500m open water swim, a 40km bike ride and a 10km run. There is also a mixed team relay featuring two women and two men over shorter distances (250m swim, 6km cycle, 1600m run). Athletes complete all three disciplines in their mini-triathlon before tagging their team-mate. The order is woman, man, woman, man.

Wales fancied a one-two before former individual world champions Non Stanford, and most recently Helen Jenkins, pulled out with injury. In their absence, England's Jodie Stimpson will be among the favourites having finished second to Stanford in last year's World Championships.

Australia's Emma Jackson is the form lady; she's fourth in the overall WTS rankings having finished on the podium in the last two rounds. Compatriot Emma Moffatt is a two-time world champion and Olympic bronze medallist, but is something of an injury doubt.

The mixed team relay, in which Great Britain won World Championship gold recently. There was no triathlon at the 2010 Commonwealth Games but the team relay has been added to the schedule for the first time.

Crawling during the run section can result in a time penalty perhaps in part due to the 1997 Ironman World Championship, which featured a crawl for the line between Sian Welch and Wendy Ingraham.