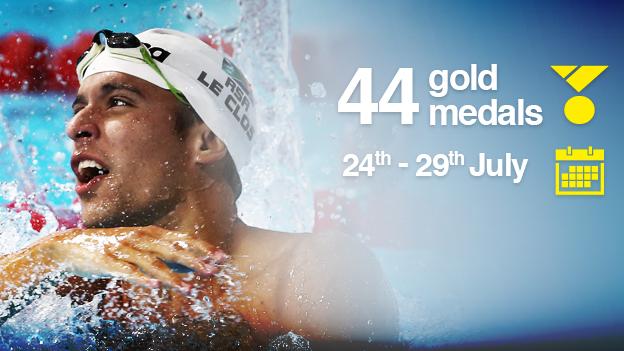 Swimming at the Commonwealth Games is the gold-medal gift that keeps giving. At London 2012, there were 32 events, in Glasgow - even without the absent open water races - there are 44. Swimming is a core Commonwealth sport and has appeared at every Games.

Scotland's poster boy Michael Jamieson will be expected to turn Olympic 200m breaststroke silver into gold. Despite being ill, England's sprint specialist Fran Halsall took her Commonwealth medal tally to seven in Delhi and should add a few more in Glasgow.

Team-mate Liam Tancock returns to defend his 50m & 100m backstroke crown amid fitness concerns following injury. Jazz Carlin could finally emerge from the shadow of Rebecca Adlington to be a multiple Welsh medallist in the long-distance freestyle events.

In contrast, James "The Missile" Magnussen - and the Australian team at large - have much to prove after a poor Olympics. The exception is Alica Coutts; a five-time Olympic medallist in London, she won five silver medals at last year's World Championships having, guess what, won five medals (all gold) at the 2010 Commonwealth Games.

The 1900 Olympics in Paris featured underwater swimming on the programme. Swimmers were given one point for each second they were under water and two for every metre covered. Don't hold your breath for it to be added to the Commonwealth Games however - Paris was its only Olympic appearance.