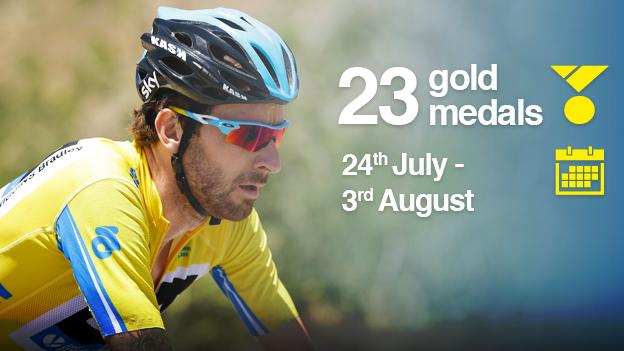 Mountain bike: There is a men's and women's event - it's a straightforward race with riders doing their best to negotiate the twists, turns and rocky terrain of a challenging course. It's a balancing act between keeping upright and keeping up speed as first across the line wins gold.

Road cycling: There are two events. The road race is a mass start in which a team of six riders per nation race over a 168km (men) or 98km (women) course. The time trial is a race against the clock in which the fastest time wins. Riders start at one-minute intervals; men ride a 40km course and the women's race is 30km.

Track cycling: There are eight events for men, and five for women, along with four para-sport contests. All the races - some of which are sprints, others a test of endurance - take place on an indoor oval velodrome track, named after six-time Olympic champion Sir Chris Hoy.

England's Sir Bradley Wiggins is aiming to win his first Commonwealth gold medal on the track. Scotland's reigning champion David Millar and England's Olympic silver medallist Lizzie Armitstead will be looking for gold on the roads.

England's golden couple Jason Kenny and Laura Trott will be hard to beat on the track. Also in the velodrome, Northern Ireland's Martyn Irvine, Elinor Barker of Wales and Scotland's double world champion Neil Fachie will be going for gold.

Australia's queen of sprint Anna Meares will surely add to her already extensive medal collection. New Zealand's Linda Villumsen has been consistently winning medals on the road for the past five years. Canadian mountain biker Catharine Pendrel will be aiming to erase her London 2012 heartache.

Para-cycling makes its Commonwealth Games debut with four events (the tandem time trial and sprint for blind and visually impaired riders). The track cycling women's team sprint has been dropped. Mountain bike returns to the schedule after being dropped for Delhi.

Track bikes have no brakes; riders stop by putting pressure on the pedals.