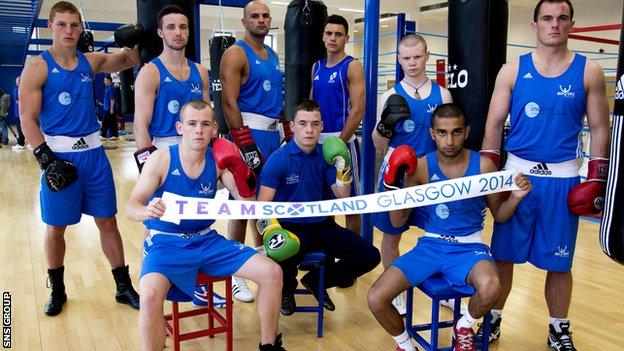 "I think we've got a great team," said the man who won a gold medal at the Kuala Lumpur Games in 1998.

"Our star has to be Josh Taylor at 64 kilos. He won a silver in Delhi in the weight class below.

"He's matured and become a better fighter and he doesn't have the same strength of field as four years ago."

Charlie Flynn (60kg) and Kieran Smith (75kg) are making the step up from the 2011 Commonwealth Youth Games.

"Our dark horse is Charlie Flynn," Arthur, 36, told BBC Scotland. "He's got, in my opinion, the best trainer in Scotland in Peter Harrison working with him every day.

"And then you look to Joe Ham and big Ross Henderson, who seem to be on form just now.

"You can tell by the way fighters talk, how confident they are and what their preparation has been like - and they sound confident, like they are going to medal, so here's hoping."

Arthur, from Edinburgh, turned pro in 2000 and held titles at British, Commonwealth, European and World level before retiring last summer.