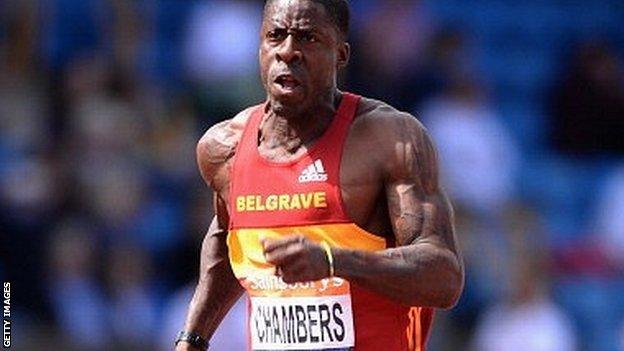 British 100m champion Dwain Chambers has pulled out of the Commonwealth Games to focus on next month's European Championships in Zurich.

The 36-year-old, who won a fifth successive 100m title at the British Championships last month, was part of the England men's 4x100m relay squad.

England Athletics have not named a replacement for the Londoner.

However, Jess Tappin, 24, has been selected to take the place of injured heptathlete Katarina Johnson-Thompson.

Johnson-Thompson, 21, was one of the favourites for heptathlon gold but withdrew on Monday because of a foot injury.

On learning of her inclusion, Tappin - a part-time personal trainer - tweeted: "Due to @JohnsonThompson devastating injury I've been asked to represent England. I promise to do my best on behalf of us both."

Chambers - who has not competed at a Commonwealth Games since 2002 - had been selected for the sprint relay as part of a squad which includes Adam Gemili, Richard Kilty, Mark Lewis-Francis, Harry Aikines-Aryeetey and Andy Robertson.

There have been a number of changes to the England team.

As part of the most recent changes, Laura Wake replaces the injured Meghan Beesley in the 400m hurdles and Kate Avery comes in for Jo Pavey in the 10,000m, although Pavey will still run in the 5,000m.

In cycling, Russ Downing has been called up for the men's road race after Jon Dibben broke his elbow, while 2006 Commonwealth champion Liam Killeen will compete in the mountain bike event instead of the injured David Fletcher.

There has also been also a change in the judo team as Caroline Kinnane has withdrawn from the -78kg event because of a neck injury. She will be replaced by Katie-Jemima Yeats-Brown.

On Monday, Sir Bradley Wiggins said he would concentrate on the team pursuit in the velodrome and would not compete in the road events in Glasgow.

England's diving team has been reduced to 14 members because injured duo Matthew Lee and Daniel Goodfellow will not be replaced.

Injury has prevented Tim Whiteman representing England in hockey. Ollie Willars will replace Whiteman, who will need an operation because a recently-broken thumb has not healed properly.