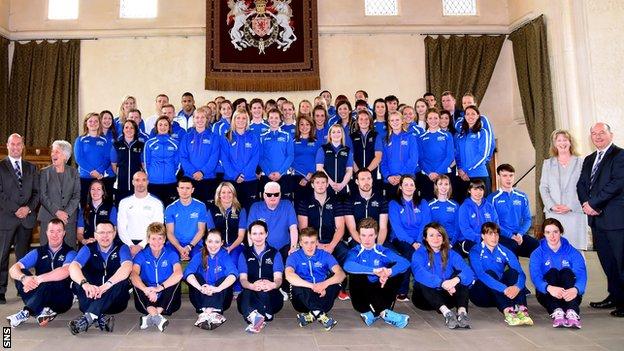 Scotland's athletes could receive up to £10,000 each if they strike gold at the Glasgow Commonwealth Games.

A £300,000 rewards scheme was announced by Commonwealth Games Scotland, an increase on the Delhi Games.

Bonuses will be available for athletes who win gold, silver and bronze.

"We did the same thing in Delhi and we ended up paying out £180,000, which we were delighted about," said Commonwealth Games Scotland chairman Michael Cavanagh.

"We have received some funding from being the host nation so we decided we wanted to reward our athletes," said Cavanagh. "The money is kept from them until they retire.

"It's about recognising that athletes are making sacrifices, sometimes financial and sometimes career progression.

We have the best prepared team that I have been involved in. The athletes are very well focused.

"For some of them it can be quite difficult to make the change, and this will help them out. Sometimes it's used if an athlete wants to retrain - we had someone after Delhi who became a personal trainer and that's how they make a living. Other people put a deposit down on a house because they were getting married.

"It's up to the athlete to decide, we just want to know that there's something there for them, because of what they have done for the country."

The hosts have set a target of beating the 33-medal haul they achieved when the games were held in Edinburgh in 1986, and Team Scotland chef de mission Jon Doig is tipping new national heroes to emerge over the next fortnight.

"We see people becoming household names every Games," he said. "There are people on everyone's watch list, but there are also those surprise athletes who have been quietly confident preparing and they come forward.

"I'm thinking like [gymnast] Steve Frew in 2006. He had been to a number of Games but he nailed that gold medal at that particular time.

"We have the best prepared team that I have been involved in.

"The athletes are very well focused. They are relaxing in the village, they are getting used to the surroundings. They are familiar with a lot of the venues. So we are confident that target is achievable.

"The home advantage is something we have obviously talked through and [the 2012 Olympics in] London has given us some great pointers in how we can use that home advantage.

"The athletes are looking to feed off the crowd but they know when to shut off. In the village, they can shut off from the outside world. But when they get on to the track, the pool, the stadiums, everyone is willing them on and I'm sure that will lift them to new heights and help them do things even they probably didn't think possible."

He added: "The great thing is we have 17 sports, these are sports that are played in a wide range of communities across Scotland and they might not get that profile.

"What it means is that those children who are playing those sports get to see their heroes performing on the world stage. It's an affirmation that their sport is important."