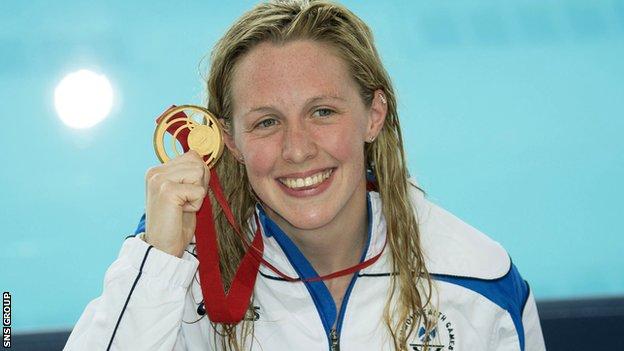 Here is the full list of Scotland's medal winners at Glasgow 2014:

Clegg, who has won two Paralympic silvers in her career so far, collected Scotland's first medal of the athletics when she stormed to the title in a time of 12:20s.

The poster girl of the Games was unable to catch the impressive run of Jamaica's Kaliese Spencer, but a passionate Hampden crowd roared her to a silver medal.

Dry finished third in the final of the hammer throw at Hampden Park, taking the host nation's medal tally to 37.

The 24-year-old's run was all the more remarkable, given she had been sick and on a drip just hours before the final, which she only reached as a fastest loser.

Scotland's Kirsty Gilmour, 20, fell short in her quest for gold as she lost 2-0 to Canada's Michelle Li in the women's singles final.

The Glasgow-based second seed, was unable to impose herself on the third seed at the Emirates Arena and went down 21-14 21-6 in just 38 minutes.

After losing at the semi-final stage, Bankier and Blair beat Peng Soon Chan and Lai Pei Jing to the bronze medal with a 21-17, 21-11 over the Malaysians.

The 38-year-old policeman from Arbroath was always in control as he defeated Canada's Ryan Bester 21-9 to win the men's singles.

His victory after 19 ends meant Scotland's lawn bowlers closed out Glasgow 2014 with three golds - the best result since 1994.

Marshall and Foster came through a nerve-shredding semi-final showdown with England, providing one of the moments of the Games when the former celebrated his match-winning last bowl.

And on Monday they stormed to a 20-3 triumph over Malaysia to earn the host nation's 12th gold medal, ensuring Scotland surpassed their best ever Commonwealth Games gold medal tally.

A second gold of the games for Marshall and Foster as the men's fours comfortably saw off English opposition in the final.

Heartache at Kelvingrove Park for the Scots bowlers as they lost 14 - 10 to South Africa, but the consolation is a silver medal.

A win over Junias Jonas of Namibia secured the light welterweight crown for Taylor in front of a passionate crowd at the Hydro on Saturday.

The flyweight from Motherwell stunned pre-tournament favourite Andrew Selby in his first fight but could not go all the way, losing a tight contest with Australia's Andrew Malone in the last four.

The 23-year-old joiner from Glasgow opened strongly in his semi-final and looked on course for a third win and a chance of gold in his home city but faded against New Zealand's David Light.

The duo made it double gold on Saturday night in the tandem sprint for blind and visually impaired athletes, losing the first race against Australia but winning the next two rides to claim a spectacular victory.

The Scottish pair were beaten by England's Sophie Thornhill and Helen Scott 2-0 in the best-of-three final to pick up the host nation's first medal of the Games.

And on Sunday the duo again claimed silver, in the 1000m tandem time trial, and again they were beaten to the gold by Thornhill and Scott.

The 24-year-old had earlier picked up his second silver medal of the Games with an impressive display, finishing second behind England's Whitlock.

He missed out on the pommel and the floor, but it was third time lucky for Purvis, who finished behind Canadians, Scott Morgan and Kevin Lytwyn, to bag a bronze.

Purvis saved his best for the parallel bars on Friday, winning gold with an impressive score of 15.533.

The quintet won Scotland's first ever team gymnastics medal with a score of 257.603, finishing second to England. This particular medal also broke the record haul for the nation at a Commonwealth Games, taking the tally to 34 to surpass the 33 won at Edinburgh 1986.

The 26-year-old won her final against India's Sushila Likmabam with an ippon to deliver Scotland's first gold medal of the Games.

Not to be outdone by her little sister, Louise is also taking a gold medal back to Coatbridge. The 31-year-old beat England's Kelly Edwards in a tense final.

The 36-year-old then announced her retirement from international judo, saying her body is "telling her to call it a day".

The 35-year-old carried the Scottish flag in the opening ceremony and carried off gold in the -100kg category, defeating Shah Hussain Shah of Pakistan.

Burton has said he will retire after these Commonwealth Games.

"Being flag bearer was such an honour, which puts a little bit more pressure on you, but luckily all the guys on the first day took a bit of that off with winning so many medals.

"Now, It is just a sense of relief at the moment, I guess tomorrow the excitement and pride will come," he said.

The run of Scottish golds in judo continued as Shropshire-born Sarah Adlington defeated England's Jodie Myers to collect the host country's fourth gold in the sport.

The Royal Marine spoke of overcoming his troubles with stress and alcohol through judo after winning gold.

"They fixed me six times, how many times can you break yourself? I broke myself rather crazily," he said of his military career.

Beaten by England's Nekoda Davis in the final, the Inverness native, coached by dad, was upset to lose in front of the partisan Glasgow audience but can be very proud of her achievement.

On Saturday evening Matthew Purssey put up a brave effort against South Africa's Zack Piontek but had to settle for silver.

The 38-year-old from Broxburn brings down the curtain on his international career in style after coming out of retirement for these Games.

On a fantastic opening evening for the Scots at the SECC, the 32-year-old, who was a late call-up to the squad, won his bronze medal bout by ippon.

And the medals just kept coming for the home team in front of a raucous crowd. Bringing judo back to the Games for the first time since 2002 has worked out very well for Scotland.

Sally Conway won a second medal for Scotland in Friday's judo competition, picking up a bronze medal by defeating Sunibala Huidrom of India.

The Scot ensured he took home a medal with victory over Australian Mark Anthony.

Dundonian Christie picked up a silver at the Barry Buddon range just outside his home town, losing out to Cyprus' Georgios Achilleos, the Delhi silver medallist in this event.

The duo scored 590 over two days with the early stages being played out in haar and then heavy rain affecting the final day's shooting.

"Considering the conditions it was a good performance," said McLeod.

The 23-year-old took Scotland's medal tally to 32 for the Games with her bronze at the Barry Buddon Shooting Centre on Monday.

The defending champion led at the halfway stage but was overhauled by Sally Johnston of New Zealand and Esmari van Reenen of South Africa.

And her silver in the women's 50m rifle three positions made McIntosh Scotland's most successful female in Commonwealth Games history with five medals, eclipsing her mother Shirley's previous record of four.

The 24-year-old from Garioch defended her title in style, smashing her own Commonwealth record in a time of four minutes 31.76 seconds.

That was a full seven seconds faster than her qualifying time but she was pushed hard all the way by England's Aimee Willmott, with the home crowd roaring her home.

It was one-two for Scotland in the pool but not the one we expected as the 20-year-old from Balfron set a new British and Commonwealth Games record of two minutes 07.30 seconds, comfortably beating Games poster boy Michael Jamieson.

On day three, Murdoch added a bronze to his collection in the 100m, finishing behind England's Adam Peaty.

Edinburgh's Dan Wallace added yet another Scottish success in the pool, racing home in 4 minutes 11.28 seconds to pip Australia's Thomas Fraser-Holmes into second place and earn the hosts a third swimming gold.

And, after helping towards silver in the 4x200m freestyle relay, Wallace finished second in the 200m individual medley to claim his third medal of the Games.

The pre-race favourite was talking about breaking the world record but the Olympic silver medallist from 2012 could not get close to compatriot Murdoch leaving the Tollcross crowd rather stunned.

The Scots produced a stunning swim to claim the silver medal in a new Scottish record of seven minutes 09.18 seconds, with Australia winning gold and South Africa taking bronze.

The 20-year-old, who finished 12th in this race in Delhi four years ago, finished third behind Australia's Leiston Pickett and Alia Atkinson of Jamaica.

"I said the crowd would make the difference between a fourth and a bronze and that's what it's done for me tonight. I'm just over the moon," said Scott.

The 13-year-old is Scotland's youngest ever Commonwealth Games athlete and proved she is set for a huge future, battling back with a sensational second 50m to land the bronze medal.

The teenager from Shetland trains in a 16.6m pool with the Delting Dolphins Swimming Club in Brae.

Scotland's newest start of the pool said: "I am really happy to have another personal best. I got a medal and I am so happy. I am feeling really, really happy."