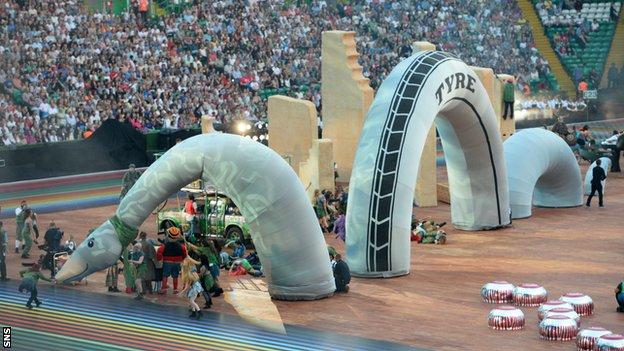 Glasgow pulsated to the tumultuous roars of 40,000 spectators and 4,500 athletes as it opened the Commonwealth Games in a riot of colour, music, laughter and kitsch at Celtic Park.

In years gone by the "second city of the empire" has celebrated the end of wars, the Empire Exhibition in 1938, success in football and the designation of being European City of Culture in 1990.

But surely never before has the Dear Green Place welcomed so many nationalities to party with such unrestrained joy as it did at this unforgettable event, to precede 11 days of sporting competition and cultural celebration.

The glorious sunshine that bathed the stadium ensured Glaswegian comedian Des Clarke had favourable conditions for his warm-up act.

Indeed, the stadium was crackling with excitement with an hour to go.

While the opening ceremony at the London Olympics was made memorable by Danny Boyle, Glasgow 2014's creative director was David Zolkwer.

He called the opening sequence, led by Scots pantomime favourites Karen Dunbar and John Barrowman, "a speed date with Scotland".

For some, the iconography of what was termed "Kingdom of the Scots" will have triggered the infamous "Scottish cringe".

They'll have questioned the wisdom of making tartan, confectionery and whisky central to the showcase.

Barrowman, resplendent in a lilac tartan suit, emerged from beneath a kilt so vast it could have skirted Edinburgh Castle.

However, this was playful stuff: could dancers twirling in giant teacake hats be anything else? It was a nation knowingly sending up its stereotypes.

The cast cavorted around models of city landmarks such as the Finnieston Crane and Wellington on his horse, topped, as ever, by a traffic cone.

They then moved north to visit the Loch Ness Monster, had a dram from the stack of whisky barrels and danced under the Forth Rail Bridge.

The routine ended with Dunbar, in kilt and leather jacket, leading a chant of "welcome to Scotland" and with Barrowman propelled to the top of the crane, yelling "welcome to Glasgow!" High camp indeed.

And then... well, everything changed. A flash mob in the city's George Square joined Amy McDonald to sing Rhythm of my Heart on the 90m screen, before she appeared in person to continue the song.

If that wowed the crowd, Rod Stewart's taking to the stage sent the decibel level off the scale.

Susan Boyle sang Mull of Kintyre as a pipe band marched into the stadium with images screened of the Queen's Baton's long and varied journey.

A fly-past of the Red Arrows marked the arrival of the Queen and the Duke of Edinburgh. Truly, the Games had arrived.

And so, from National Anthem to dance anthem as Calvin Harris added his irresistible rhythms to grainy footage of the late Andy Stewart in full Highland dress, singing "Come in, come in".

The Scotland of kailyard and tartanry reworked for the 21st century.

Nations' and territories' teams made their grand entry by continent, each of the 71 preceded by a gillie walking a Scottie dog sporting a coat bearing the country's name.

Asia, Oceania, Africa, the Caribbean, the Americas and Europe - the world had come to the east end of Glasgow in an epic parade.

Not too long ago in Glasgow you'd have been hard pushed to find a pink suit.

Yet here in a city trying to shake its tough image were hundreds of volunteers dressed all in yellow, in cerise, green, red, yellow, blue and pink, lining the multi-coloured track to dance endlessly as the teams skipped, strolled, rolled and back-flipped past.

It's hard to reconcile this with the Glasgow of a generation or two ago. It's a city of contrasts, pockmarked by pockets of poverty but also blessed with beautiful parks, buildings and galleries.

More than anything, as the city's marketing bureau proclaims: "People Make Glasgow" and their response to the massed ranks of athletes before them at Celtic Park was stirring.

The honour of hosting these Games was palpable, an emotion that found its voice most strongly when The Queen received the Baton from Sir Chris Hoy to declare the 20th Commonwealth Games open.

Moments before, as the words of Robert Burns graced the screen, declaring "Wi' joy unfeigned brothers and sisters meet", and as violinist Nicola Benedetti played the Bonnie Banks o' Loch Lomond while the Commonwealth flag was raised, a city, a nation and a Commonwealth of nations felt the strongest of bonds.