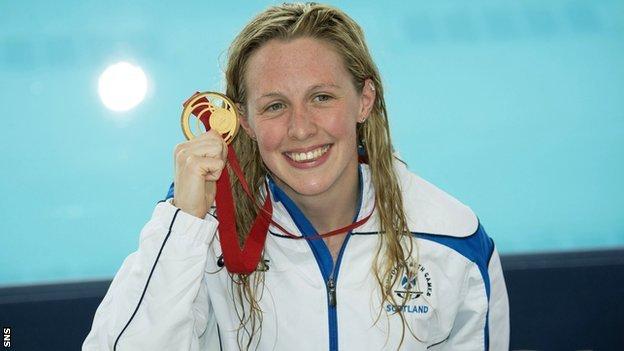 Ross Murdoch returns to the pool after his his stunning 200m breaststroke success, while Michael Jamieson and Robbie Renwick are also chasing podium places.

The home nation have already claimed two gold medals, a silver and three bronzes in judo, and Patrick Dawson and Sarah Clark lead home hopes on the mat.

Once more the Sir Chris Hoy velodrome is the centre of attention with the Men's Time Trial B Tandem and Women's 300m Individual Pursuit, with Katie Archibald a strong contender.

Scotland will hope to continue their excellent work in the pool, on the judo mats and in the velodrome, emboldened by the successes of Thursday.

After returning to our screens yesterday for the first time in the Games since 2002, the support for Team Scotland Judo athletes has been momentous. Scotland will be basking in Thursday's successes hoping to show equal dominance in Friday's events.

Scotland's 25-year-old Edinburgh athlete Patrick Dawson will hope to prove his quality in his 73kg classification after winning a silver at this year's British Championships. Sarah Clark will remember the 2002 Games fondly where she won silver in the 63kg competition, and the 36-year-old and hopes to go one better 12 years later.

All eyes were on Jamieson and Hannah Miley in Thursday's pool session, though Ross Murdoch emerged as a surprise hero. Hopes will continue to rest on a host of strong Scottish swimmers.

Reigning British Champion in the 100m Breaststroke, Murdoch, 20, will be going for a second gold of the Games, and both Jamieson and Murdoch could be amongst the medals again.

In the 200m Freestyle, 26-year-old Robbie Renwick will hope to defend his Commonwealth title which he won in Delhi four years ago. Renwick, who lives in Glasgow, missed out on the medals in London 2012 where he took 6th place.

Aileen McGlynn and Louise Haston won Scotland's first medal of the games in yesterday's para-sport sprint B Tandem, taking silver. Hoping to show up well today are medal hopefuls Neil Fachie and Craig Mclean aiming for gold in the Time Trial B Tandem.

Fachie won gold at the 2012 Olympics in the same event with then partner Barney Storey. In the same Olympics Mclean won gold in the sprint. Their combined talents are likely to rouse huge excitement.

Katie Archibald will take on the 3000m Individual Pursuit, competing also against team-mate Anna Turvey amongst others. The reigning World and European Champion as part of GB's women's team pursuit is determined to make an impact in the individual as well as her favoured team event. Archibald is still a newcomer to the cycling world having originated as a swimmer, coming in to the cycling scene in 2011.

Scotland will compete in the Rhythmic Gymnastics competition at the Glasgow 2014 Commonwealth Games for the first time since 1998. Rebecca Bee, Lauren Brash and Victoria Clow were nearly reduced to tears by the reception they received on day one.

Brash, aged just 15, managed to progress to the final and will be in action again on Friday.

Scotland start their Pool A campaign against St Lucia.